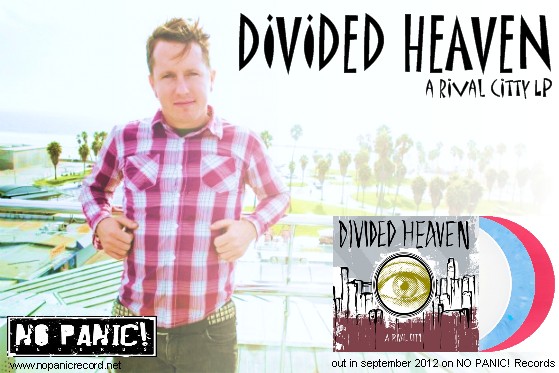 DIVIDED HEAVEN (Los Angeles/USA) will release their full length ‘a rival city’ on limited 12″ through NO PANIC! Records exclusively.

Simply put, Divided Heaven is Jeff Berman, an East Coast transplant living in Los Angeles with a voice and a guitar. On record and stage, Divided Heaven is a punk band without the amplification, singing stories rooted in history and politics, travel and experience, love and hope.

The pedigree for an acoustic performer may not often come from time on the road with punk and hardcore bands, but it is this background that sets Divided Heaven apart and makes the music authentic. Berman has spent the last ten years playing all around the world in bands including The Boils, Protagonist, The Rites, and The Statiks.

Berman began Divided Heaven as a musical travel journal in 2003 while studying in Europe. As time went on, he became serious about crafting his voice and songwriting style, drawing upon musical influences spanning from the Swingin’ Utters to Elliott Smith and lyrical influence from the cities he’s called home: Washington DC, Berlin, Brooklyn and Los Angeles.

Summer 2011 brought the completion of the first Divided Heaven full-length, “A Rival City.” The 10 songs play like a road trip with an old friend, as honest views of familiar places, stories, and people go passing by.

Divided Heaven is consistently playing shows on both coasts and building a diverse fan base. Whether it is opening a hardcore matinee in a sweaty basement or headlining a café, Berman has the dynamic to hit the audience in a place that is familiar with songs that make you think and sing along.