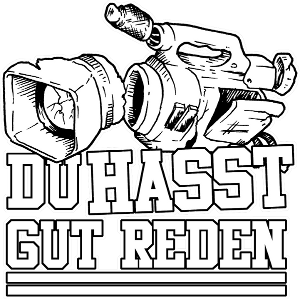 Du Hasst Gut Reden is back with a new interview. The past ones were fun to watch and this time they hooked up with Dominik Elberskirch. As with the previous one, they included an English transcript for us, which is awesome, so all of you can properly understand what’s going on. These interviews are worth checking out if you ask me. Dominik is a cool guy, we’ve been mailing for years now and he was great to us when he booked us on that Supertouch show in Nuremberg. Looking forward to your next zine Dominik! (And that’s not because you mentioned Some Will Never Know)

If you don’t see any subtitles, press the CC button, or just read below:

So.. I’m Dominik I am from Nuremberg…well I’ve been living in Nuremberg for 10 years. I’m originally from a small town in the “Oberpfalz” (Bavarian Upper Palatinate). I came to Nuremberg to study and then started putting on shows about 5 years ago. Ya, it’s been about 5 years. Besides that I have a interest in zines. So every thousand…every two to three years I’m able to release one.

What I like about hardcore? ..well of course the music is one thing. But what I like about hardcore is, that similar to punk, everyone can express themselves in the music even if they’re somewhat limited in their musical abilities. Music that may be important or relevant for yourself, but often times is also relevant for other people. That’s one of the things I think is cool about the music. In the music, you’re able to vent about your frustrations or things you think are stupid. Just let it all out, which somehow feels really good. Well, that’s the one thing. The other thing I like about hardcore is the whole network of people. Once you become active in the scene, you always know someone, who knows someone, who knows someone. Which means you have this chain of people. Let’s say a guy tells me that some dude in Hamburg is a good contact to ask about things, and I go talk to this guy and say “your friend in Oberhausen told me you’re the guy to talk to about setting up some things”. Like setting up a show or something like that. Well..I don’t know, it just usually works out. Well actually it almost always works out. And it works the same way for all of Europe and the rest of the world. And I just think..well, that’s a cool thing. Although there are a lot of divisive opinions within the hardcore scene, ideally there is always still a unified overall message. And I think that’s cool. This message could be the clear statements against Nazis or various other issues that are important to someone and that they would like to communicate to people. This may not be completely unique to the scene, but it’s very characteristic for it. So I think it’s great.

I came in to contact with hardcore in the late nineties. I think I was about 17 when I saw this small show with Shai Hulud in the youth center in Burglengenfeld. At the time it was something really crazy. It was supposed to start at around nine according to the flyer and of course the show started really late and went on until one thirty in morning. But I really liked it and started driving out to shows regularly after that. I had friends who were in bands, that I would ride to shows with. And that’s how I kind of grew in to the scene. I met a lot of people and started realizing you can make this or that and start being active yourself. Eventually I reached the point where I really wanted to make my own stuff.

Making shows started with “Today The Scene”. It started with five people and got a little smaller as time went on. People moved away or lost interest and we ended up reducing down to two or three people. So it’s what “Tomorrow The World” ended up doing in Nuremberg. The same thing the punk kids or others that have been doing shows for a long time, like Patrick Baclet, have been doing. So everyone is kind of doing there thing but there are common threads throughout. Of course there could always be more but that’s something that could be addressed from all sides. But, I’ll say as time went on something new came out of it. The thing that is now running as “power and equality”. That’s our current project. Three people, Fabian, Sharon and me. Flo is a little active in the background. But like I said, I always think of it as a community. If another group needs help for a show or something then most of the time other groups will reach out and go beyond their own interest. If you’re in a bind you may still look out for your own thing first, but most of the time you just help each other. I think that’s really cool.

The two The First Step shows we did were definitely super cool. One of them 2007 the other 2008. There were a lot of people there and the mood was always pretty cool. You could notice the people came from all over the place. I believe some of them had to drive five or six hours to get there. Even people that have been listening to hardcore for a long time showed up and were super motivated. I really liked that. You could feel the anticipation of the people when they arrived. It was some great shit. We’ve also done Black Friday 29 several times in the last three or four years. Those were also shows with a lot of people and a great mood. That was always a lot of fun for me.

It always takes me a long time to complete a new issue. I usually start by making a list of people i’d like to interview. I then procrastinate for a long time, followed by the announcement of the release three or four times before I delay the release for another half-year, year, or whatever. And in the end it comes out and is actually a version I already had three or four months prior. By the time I start working on it I’m already crossing out half of the list I originally created, because I’m no longer interested in the bands or because it is no longer relevant because the bands have separated or whatever. I’ve gotten to the point were I prefer interviewing people that I already know because the conversations seem more fluid and the questions can be more direct when sending emails. Or I start on a topic that I’ve always been interested in researching anyway and I haven’t read anywhere else. Reviews, for example, are it’s own art form. An art form that I’m completely incapable of, and not really interested in. I’m not made to write reviews. I could easily write a bad review, but if something is just kind of middle-of-the-road quality it’s really exhausting to write a review. I’m just to lazy to do it. And frankly, making zine works the same way.

Max Mitchel from Sheffield. Great guy. When he makes a zine then you know that it’s going to be something really great. For example: “free Wesley Snipes” for tax evasion. This is one of those things that almost couldn’t be more original or personal. It’s definitely really good. It came out this summer and it was a lot of fun to hang out with him at the Fluff Fest and sell this stuff. Another thing I’m a big fan of is the “Effort Fanzine” made by Kalle and Ulf in Sweden. This is issue number three. This was the last “real” issue but there was also a React Records issue for the last React
showcase. But that was mostly a photo issue. I think the first one came out in 2009. The way they made their zine definitely visually inspired all other people making zines in Europe. Showing them how it could be done visually. That’s definitely cool. I also really like the “Some will never know” from Pim. That was also one of those zines one would call really phat. In the end something like that is always good.

I also listen to a lot of non-hardcore stuff. But it’s not like I say that certain records are amazing or something. Things I could always listen to is something like “Arcade Fire”. I really like them. Something I just recently started listening to is “Agnes Obel”. I think that’s the name. It’s really quiet music done by a woman with a piano. It’s great. Personally the “Rollins Band” is one of the bands I can still listen to. I listened to them when I was 14 or 15 and I still like them today. So basically there’s like three bands, but there I don’t have a top 10 list where I say “this record is a must”.

I really like to eat. So, of course I like to cook often and in large amounts. Other than that, I like to hang out with my girlfriend, who I get a long with great and would, if possible, only spend time with. She’s definitely the person in my life that gives me the least amount of aggravation. I also like to go on runs. Well, I try to stay somewhat fit as much as possible. And of course I really like to read. Last year I discovered Yoga for myself. It’s working out pretty well. When you get older and everything starts to creak then it can be a good balance.

Two shows are already set for the spring. On February 14th it’s “Inherit” from England. It’s a straight-edge band with people from “Never Again”. Adam Malik who does vocals for “Pain Runs Deep” from Poland. Who I’ve also known for a long time. And people that have played in “Cold Snap”. So basically a bunch of people who have been around hardcore for a while. So that’s pretty cool. It will be in a practice space in the “Diana Strasse”. We’re trying something new there. The guys from “Vengeance” made it possible for us to have a show there. Another thing that’s coming up is “Sectarian Violence” which is on April 1st. And that’s a band with…let’s see…two people from “Never Again” ? Three ! Three people from “Never Again”. The singer is from “Coke Bust” and guys from “Law and Order Fanzine” and “Stay Hungry”. They’re all good friends and decided to do a euro tour after they played last autumn in England. Like I said, I think I want to make a “Heat” in the summer. But before that I’d like to release the “running Fanzine”, which I have already been talking about for way to long and need to get going on. That’s right, that’s about what you can expect on the output side.