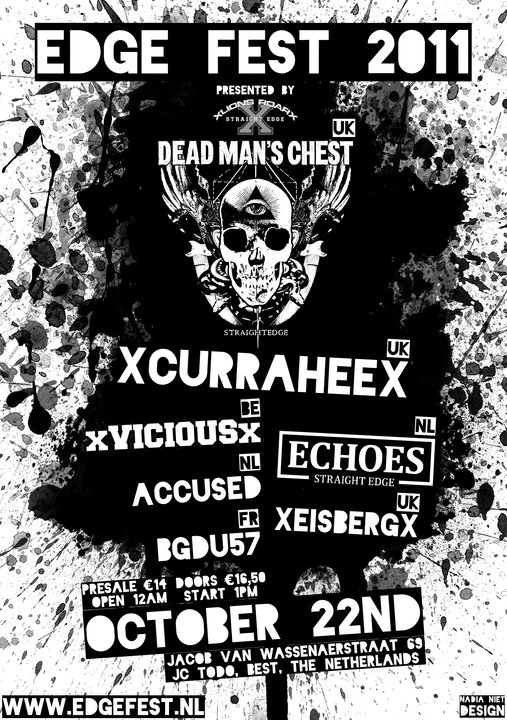 After bands cancelling the show because of the background of one of the organisors, Lorenzo Sober decided to cancel Edge Fest in The Netherlands altogether. Scheduled bands xCurraheex, Dead Man’s Chest and xAccusedx will probably play a show on October 22nd in Belgium.

Things got snowballing after Germany’s WolfXDown cancelled their appearance and posted this on Facebook:

As it became apparent that the co-promoter of this year’s Edge Fest in Best, NL and owner of the new clothing company Xlions roarX, “Terror Tom“, is the well-known neo-Nazi Thomas V., we’re NOT gonna play EDGE FEST on oct.22.

In response, Thomas V. of Xlions roarX,  one of the event promoters,  released a statement. Part of the statement is presented below, with the entirety posted on the Xlions roarX Facebook page:

I really am disappointed that nobody who found out about my past ever came to me. Instead of asking the guy involved, they immediately started their little phony internet war, without checking the information first. Some parts are unfortunately true, but most of it is made up. These people are just as tolerant as the people their fighting, they just measure with different standards.

Xlions roarX have since announced that they will be pulling out of Edge Fest. The full statement can be read on the Xlions roarX Facebook page:

Due to all the commotion around the past of xLions Roarx´s founder Terror Tom, we have voluntarily decided to pull out of Edge Fest, for the sake of the festival. Edge Fest will still take place, but we won´t be any part of it.

And today Lorenzo Sober, the other organisor announced that there won’t be a Dutch Edge Fest in 2011:

It breaks my heart that we have to do this but edge fest 11 in the netherlands is canceled due too problems most of you already know what kind of problems with our coo organizor.