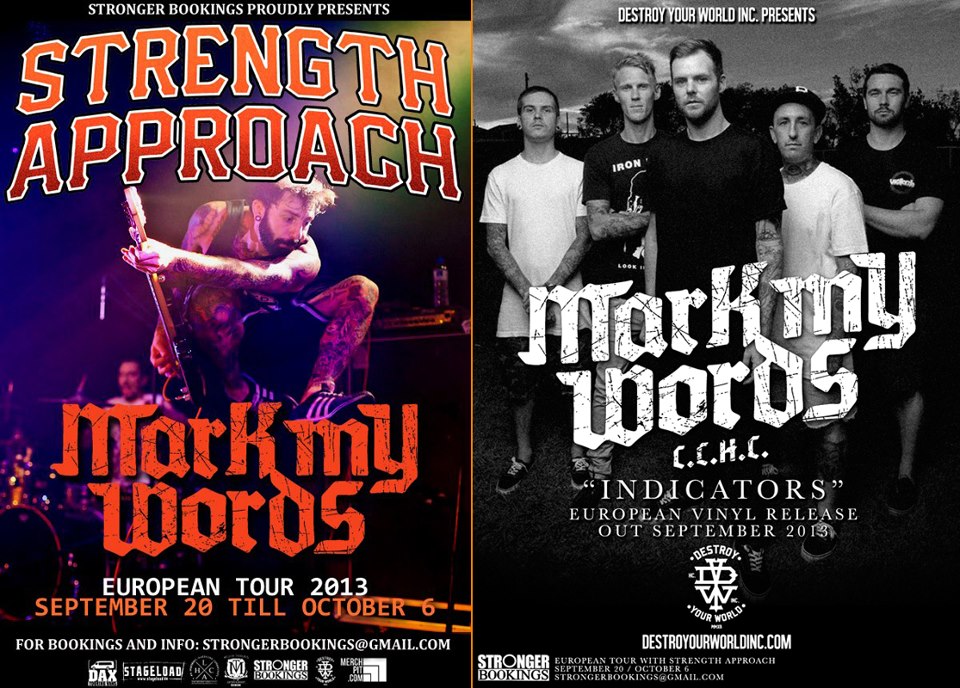 Some updates concerning what’s going on with DESTROY YOUR WORLD INC. at the moment. First of all, we finally have a proper website on which everyone can get news about our releases, bands, tours and more stuff, so check it out and spread the word to all your friends!

MARK MY WORDS “INDICATORS” LP OUT SEPTEMBER 2013
We’re stoked to finally have a release date for the European vinyl release of the Mark My Words “Indicators” LP. Originally only released on CD in Australia later last year on Skull & Bones Records, we’re proud to release this great piece of hardcore here in Europe and on wax!

For those of you not familiar with the Central Coast quintet, since their first EP in 2009, these guys have been delivering some heavy hardcore to the masses, reminiscent of legendary Madball and Terror with the more modern touch of bands like The Ghost Inside.

The LP will feature a brand new artwork and will drop just in time for the band’s European tour supporting Strength Approach. Listen to a couple of their songs in the player on our website, start moshing and expect some news about pre-orders at some point during the summer!

No strangers to touring together, for this tour the two bands have decided to team up with Stronger Bookings, so make sure you get in touch with them if you want to book a show in your hometown and e-mail them at: strongerbookings [at] gmail.com

To support the South American release which is going to feature both the “Roma Hardcore State of Mind” EP and “With Or Without You” LP, Seven Eight Life Recordings is now working on a Strength Approach tour in South America for July 2013. Get in touch with them at: rafael [at] seveneightlife.com