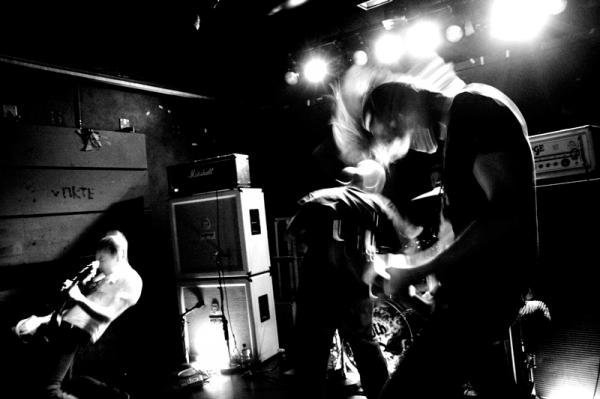 Swiss ELIZABETH (hardcore/crust in the vein of Rise And Fall, Converge, The Hope Conspiracy, with ex-NOSTROMO vocalist) has entered the studio to record their debut EP “When Vultures Land”. A 12″ vinyl release is planned for march via Throatruiner Records and I For Us.

Their first home-recorded EP can be heard here:

The label says the following about the band and the upcoming record:

“Get in the van” as a leitmotiv; ELIZABETH is one of those bands that have understood that the strongest reputations could be only built on the road. Thus, this last year, their home-recorded demo has been enough to let them travel through the whole Europe and shared nearly forty stages with the upper crust of european hardcore/punk. With“Where Vultures Land”, their debut EP, these swiss carve their way into the heaviest and most intense branch of their scene, alongside of bands such as Converge, Rise And Fall or The Hope Conspiracy. Twenty minutes played with a constant energy, which is demultiplied by the unmerciful rusted vocals of Javier (with an heavy burden in the matter as an ex-Nostromo). More than enough to one of the most promising bands of the european scene, now you’re warned.

• Recorded, mixed and mastered by Serge Spiga
• Artwork by Thierry Tonnes ~ http://thierrytonnes.com
• EP 12” out in march and limited to 500 copies
• Co-release Throatruiner Records & I For Us