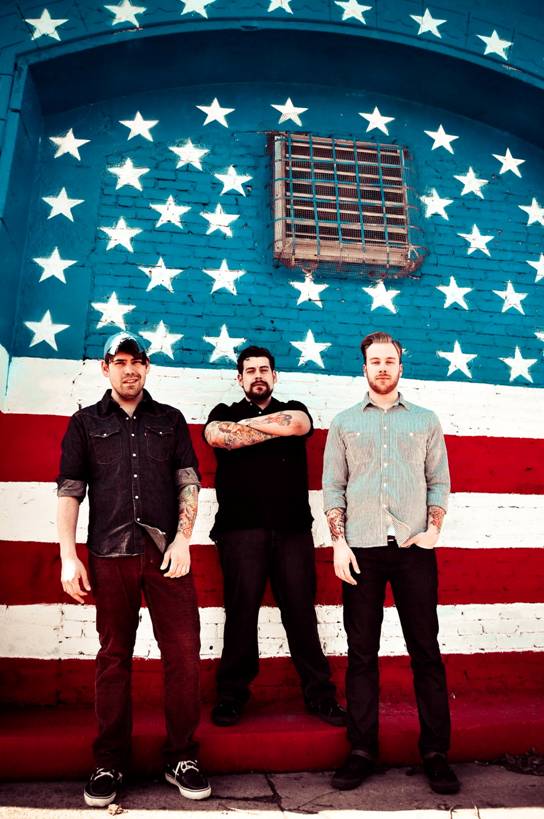 “When one door closes, another opens but it’s hell in the hallway,” says bass player Kenny Fletcher. “I kind of feel like that sums up everything we have been doing musically for the past 13 years.” …But it’s Hell in the Hallway is the debut EP from the New York City natives, and while the band may be new, the members are far from wet behind the ears. Veterans of the tri-state area DIY punk scene dating back over a decade, brothers Will and Gino Romeo, along with childhood friend Kenny Fletcher, have been in their fair share of local hopefuls. Gameday Regulars, however, is far from needing hope in order to secure future plans. Mightier Than Sword Records will release …But it’s Hell in the Hallway on September 27th, after which the band will embark on full US tour with label mates Nightmares For A Week. Dates for the fall tour will be announced soon.

…But it’s Hell in the Hallway was recorded in the spring of 2011 by producer Gregory Dunn, singer of Westchester, NY’s Moving Mountains, at his home studio in Cortland, NY. A relentless display of the band’s influences (Jawbreaker, Hot Water Music, Samiam, and Lucero, to name a few), the EP highlights where Gameday Regulars came from, while simultaneously showcasing the direction in which they are headed. Staying true to their distinct sound, the band has crafted an EP that packs a punch, while remaining constantly poetic and catchy from beginning to end. “The meaning of the lyrics on this record have to do with stories of people I have come across in life,” says singer and guitar player Will Romeo, “battling addiction, depression, and misfortunes. In ways, I have related to their stories, which have helped craft these songs.”

Hailing from the adjacent Bronx neighborhoods of Pelham Bay and Morris Park, Gino Romeo and Kenny Fletcher started a close friendship at the age of 14 in 1998. Will Romeo, the senior of the Romeo brothers, has been playing with the two in various bands for years, but this latest incarnation, dubbed Gameday Regulars (which they named for their love of sports), started in January 2011. Regarding the meaning behind the name the band states, “We are big sports fans, we are gameday regulars.” 2011 has been a busy year for the band and will prove to continue to be so. “The whole process of creating this record was truly an amazing experience from start to finish. We believe that we captured exactly what we wanted,” says Will Romeo, “the essence of Gameday Regulars.”

“Gameday Regulars are very excited and grateful to be part of MTS family and for the release of this EP. The future consists of hard work, touring, and writing more heartfelt records. Thank you.”

…But it’s Hell in the Hallway is now available for pre-order at:
http://store.mtsrecords.com/products/12486.