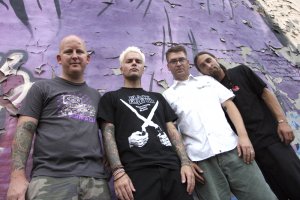 We already told you there were rumors of a Good Riddance reunion tour. Well, it’s official now.

This was posted on the Fat Wreck site:

On May 27th, 2007 Good Riddance played our last scheduled show. It was advertised as such and recorded for posterity. Friends and fans traveled from all over to be there and it was a night filled with passion and electricity. In the years since, the members of the group have moved on to raise families, flourish in their respective careers and remain true to many of the band’s original ideals. Since that final show we’ve been asked countless times about getting back together and playing again. We never really considered it an option, seeing as how we’d played our final show (“final” being the key word) and all. When asked why they wanted us back their most common answer was “The songs!

We miss the songs!” As it turns out we miss them as well. After nearly five years, Good Riddance has decided to perform as a band again. The number of shows, when, where and all the other specifics have yet to be determined but for those of us who really missed the songs and those of you who maybe never got to see the band play, there will be Good Riddance shows in 2012 and perhaps beyond. Since that final show we have received offers, as lucrative as they were numerous, to reform for festivals, showcases or various other things. We have turned them all down. This decision has come from an organic desire to play and hear the material again. Many of the factors which drove our initial decision to call it a day are either water under the bridge or no longer relevant to us. We are not trying to compete with anybody, make a living off the band or build a fan base. We just want to play songs which have meant so much to us and so many others.

We look forward to reconnecting with so many of you who made our journey possible as well as perhaps introducing ourselves to an entirely new audience of people who may have heard our records but never saw us play. Good Riddance has always been more than a band. We will also be focusing heavily on promoting and advocating for groups and organizations we support which we believe are key in creating a more just and caring world. We will appreciate any support our fans can offer these groups as we endeavor to stretch our music and it’s power beyond the milieu of simple entertainment. We look forward to seeing you at a show soon.