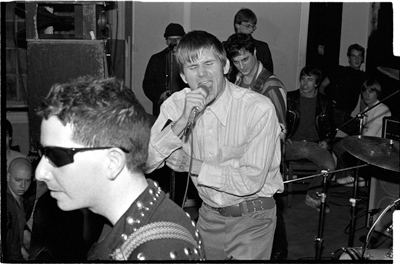 Among the ranks of the now-classic ’80s DC punk / hardcore scene, GOVERNMENT ISSUE are on the relatively short list of bands that left a lasting impression on both that city and the scene on whole. While many of their early contemporaries crumbled with time, their ever-evolving sound helped keep GOVERNMENT ISSUE vibrant and fresh throughout their nearly decade existence. With a line-up that featured constants John “Stabb” Schroeder on vocals and, for most of the time, Tom Lyle on guitar, the band also saw stints with many well respected musicians among their membership, including Brian Baker (Minor Threat, Dag Nasty, Bad Religion) and Mike Fellows (Rites of Spring, Silver Jews, Miighty Flashlight).

Despite their notoriety, one of the best kept secrets in the GOVERNMENT ISSUE camp for all these years has been the stockpile of live recordings of their shows, dating as far back as 1981 and spanning their career as a band. A handful of these recordings have surfaced over the years, but the vast majority weren’t even known to exist outside of a select few people. Now, over 30 years since forming, GOVERNMENT ISSUE have started the process to release some of the recordings from their early years.

Today, GOVERNMENT ISSUE will release the first volume of their new Live Bootleg Series, featuring 27 live sets recorded between 1981 and 1985. Showcasing live performances from across the U.S., the series documents a band as they matured and morphed, adapting to the ever-changing musical landscape of the early ’80s. All 27 shows will be released digitally, available via iTunes / Amazon, as well as directly from the band via Bandcamp. When purchased directly, many of the sets will also include bonus material such as photographs from the shows and the flyers for each. Rarely do bands have the foresight to document their time together in such a meticulous way, and now fans of GOVERNMENT ISSUE can enjoy these incredible time capsules from the past.

GOVERNMENT ISSUE have also announced plans to reunite for a performance alongside Dag Nasty, Scream, Youth Brigade, Black Market Baby, and Kingface as part of a two-night, sold out event on December 28th and 29th at The Black Cat in DC, celebrating the release of a new documentary entitled Salad Days: The Birth of Punk Rock in the Nation’s Capital.