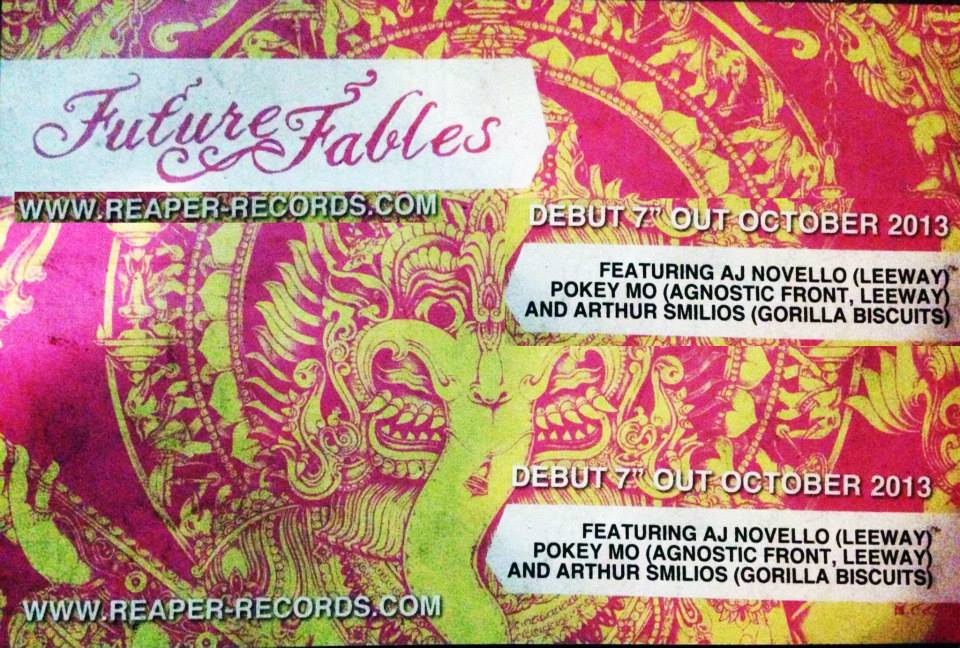 AJ Novello takes a different approach to his latest endeavor with longtime friend and band mate Jimmy “Pokey” Mo (LEEWAY, BOTH WORLDS, AGNOSTIC FRONT) and fellow Astoria-bred Hardcore musician Arthur Smilios (GORILLA BISCUITS, CIV). One might expect another rekindled hardcore “super group” that rehashes the sound of their former outfits. FUTURE FABLES however is sure to raise eyebrows with a sound that more resembles ’70s British hard rock and the early ’80s NYC underground. inspired by the likes of Swan Song-Era ZEPPELIN and THE CLASH, FUTURE FABLES also take the best elements of post punk and power pop from bands like KILLING JOKE, THE PROFESSIONALS, PUBLIC IMAGE LTD, SQUEEZE, etc. to create a unique hybrid of melodic hard rock.

After seeing The Song Remains The Same in 1976 at the age of nine, Novello bought every hard rock record he could afford, mostly SABBATH and ZEP. As most kids of the time who were into hard rock, he wanted to emulate Jimmy Page so he started taking guitar lessons. A few years later, he was exposed to punk rock, which completely changed his life. The guitar lessons stopped and the desire for starting his own band, the greatest gift of punk rock, took hold. Entering high school in the fall of 1981, Novello met like-minded people who also grew up on hard rock, but were now deeply into punk and its offspring hardcore. Watching FEAR on Saturday Night Live and going to school with members of hardcore bands like KRAUT, TOKEN ENTRY and KILLING TIME made him start his first band, LEEWAY.

Pick up Future Fable’s debut 7” on red or white vinyl in the Reaper webstore starting today.