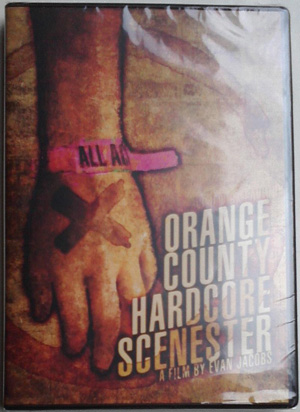 In Orange County, California in the 1990s, hardcore music was a thriving subculture that featured such bands as Insted, Carry Nation, Farside, Outspoken and 411 among many others. Local labels such as Nemesis, Workshed, Revelation (recently transplanted from New York), New Age and Conversion fed the the appetites of a scene that wanted nothing more than an outlet for their self-expression.

On August 14, Anhedenia Films will release ORANGE COUNTY HARDCORE SCENESTER on DVD via Revelation Records (www.revhq.com). The DVD will sell for $10. It will also be available as a digital download (to own or rent) from Amazon.com that same day. It is $1.99 for a 7 day rental or $5 to own it.

Film history is littered with hardcore/punk documentaries featuring various scene participants waxing rhapsodic about the rise and fall of their once glorious movements. This film isn’t one of them. Well, not really.

While the rise and fall aspect is there, this documentary is a highly personal (and in no way definitive) look at the Orange County hardcore scene from 1990 to 1997. Featuring all the bands listed above as well as a slew of others (Gameface, Eleven Thirty-Four, A Chorus of Disapproval, Mean Season, Ignite, etc.), viewers get to experience never-before-seen photos and videos as well as hear a unique take on the time period covered.

Told through narration and images, Orange County Hardcore Scenester is a time capsule of sorts in the ever-evolving story of hardcore punk music.

About Anhedenia Films
Anhedenia Films specializes in low budget productions. Since 1995 we have distributed 10 feature length films worldwide. Our films have played on television, been discussed in various books, and screened at festivals all over the world. Almost all of our titles are available on DVD and VOD from Amazon.com. Anhedenia Films is headquartered in Fountain Valley, CA.

Here are the first 7 minutes of the documentary: