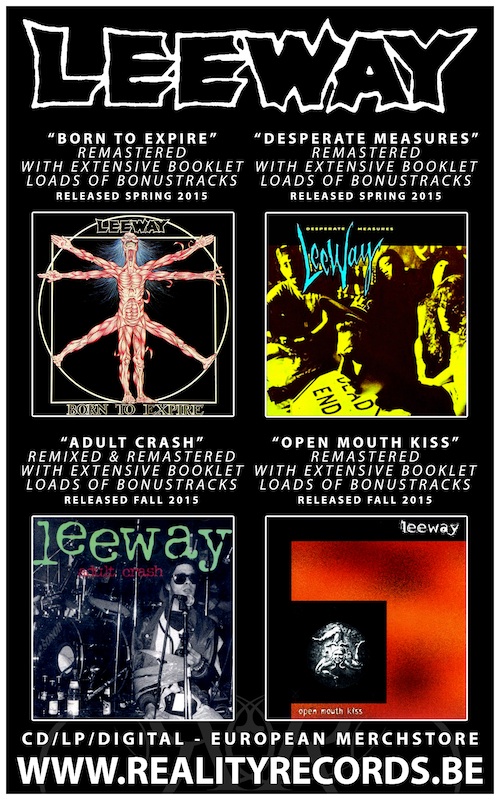 Reality Records got in touch with us with the following news:

In our 15 years history as a label we are exultant that we can announce the following news:

We’re going to re-release the 4 LEEWAY full lengths on Reality Records!
LEEWAY brought us some of the best crossover / thrash / hardcore ever written and is still a big influence to a lot of current and new bands in our scene! These albums were long out of print and deserve the right sound! ‘Born To Expire’ & ‘Desperate Measures’ can be considered as milestones in the hardcore history worlwide, while ‘Adult Crash’ and ‘Open Mouth Kiss’ are just way to underrated!

All of them will be remastered, will come with an extensive booklet and on top of that, every album will contain loads of bonustracks!
The formats we’re offering: CD / LP / digital!
Expect ‘Born To Expire’ and ‘Desperate Measures’ to be released in spring 2015!
‘Adult Crash’ and ‘Open Mouth Kiss’ will be released later on this year around fall/winter 2015!

Additional info about the bonus tracks and sound quality:

“A lot of live stuff icluding rare recordings with Mackie on drums. Each album will have about 8 bonus tracks”
“Adult Crash will be remixed and remastered and sound 1000% better”

I for one am pretty excited to be able to own “Open Mouth Kiss” on vinyl. Can you spell underrated?