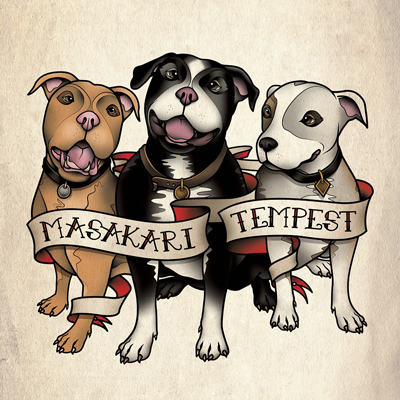 Preorders for the Masakari / Tempest Benefit Split EP and the Little Sister EP are now available on our website at http://www.replenishrecords.com

Formed in Ohio in 2006, Masakari is a five-piece band from Cleveland that unleashes a devastating blend of hardcore, d-beat, and crust with their own point-blank, by-the-throat approach to these classic styles. The band wastes no time ripping our government, corporate, and religious institutions to shreds while raising awareness for both human and animal rights amidst crushing waves of pure aural aggression. The split features both an unreleased and a live version of “X. Pain Conceived As A Tool” from their album The Prophet Feeds.

Formed in Canada during the fall of 2007, Tempest is a five-piece band from Vancouver, British Columbia that combines elements of hardcore, crust, and post-metal into a cathartic wall of thunderous riffs and searing vocals. The band’s relentless brand of dark hardcore is driven by the issues of animal rights, overpopulation, and religion to create a truly claustrophobic, exhausting, and terrifying musical experience. The split features both a remastered and a live version of “Death Rattle” from their album Passages.

The Masakari / Tempest Benefit Split EP is now available through Replenish Records on 7″ vinyl with a double-sided foldover jacket (limited to 500). 100% of the proceeds will be donated to Wiggle Butts Bully Rescue of Cleveland, OH and HugAbull Advocacy & Rescue Society of Vancouver, BC. Replenish Records hopes to raise not only funds for these unbelievably compassionate organizations, but also awareness about breed specific legislation and our responsibilities as humans to our animal companions.

Stream and download the entire Masakari / Tempest Benefit Split EP for free exclusively from our Bandcamp or below:

Formed in Ohio in 2010, Little Sister is a five-piece band from Cleveland that combines elements of hardcore, crust, and death metal to create a vicious tension between underlying melodies and undeniable power. The band tackles the issues of war, oppression, and alienation in a semi-detached but realistic form to a completely dark, brooding, and devastating soundtrack.

Little Sister’s self-titled EP is now available through Replenish Records on 7″ vinyl with a double-sided foldover jacket (limited to 250 clear and 250 black). The first 50 preorders will receive a custom silkscreened slip cover that doubles as back patch (pictured above). Don’t sleep!

Stream and download the entire Little Sister EP for free exclusively from CVLT Nation at http://www.cvltnation.com/exclusive-cvlt-nation-streaming-little-sister

Please note that all orders that include preorder items will ship in June.