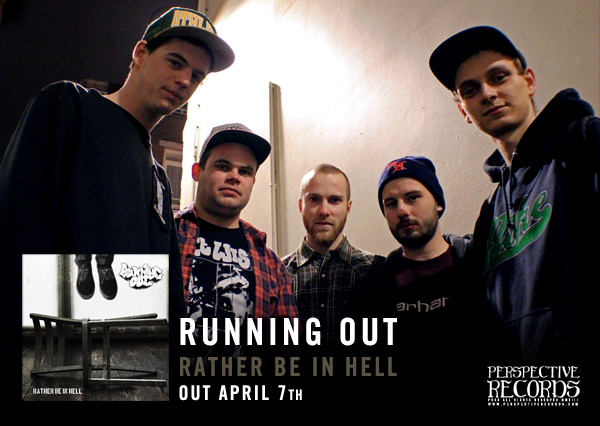 We recently reviewed Running Out’s debut EP Rather Be In Hell (check out the review right here). The release has been available as a free download, but now the band announces Belgium’s Perspective Records will do a physical release on April 7th. See below for statements by the record label and the band:

Perspective Records: “We’re always excited to see when new, young bands scratch the surface and share the same vision like we do. RUNNING OUT, coming from Brabant (The Netherlands) is one of those bands. They’ve been together since March 2011 and have been playing shows all over Holland and Belgium. Angry, pissed off and in your face is the best way to define their music, inspired by bands like Backtrack, Swamps, No Warning. These young wolves (described by some as the new breed of Dutch HC) caught our attention after the online release of their newest EP. We decided to release their debut 5 track EP ‘Rather Be In Hell’ as a physical copy on April 7th, 2013. Pre-orders are up HERE!”

Running Out: “We’ve got some pretty cool news to share with you guys. We can proudly announce that we’re part of Perspective Records along with A Strength Within, Ashes and 18 Miles. Our EP ‘Rather Be In Hell’ will be released by Perspective Records on the 7th of April. Perspective Records is a Belgian record label that promotes young hardcore bands with a hunger to spread their music. You can find them on Facebook, but also at WWW.PERSPECTIVERECORDS.COM, which holds all information about every band including us. We’re arranging a release show at the moment and as soon as we have some more info about that, you’ll hear it right away. We know one thing for now and that is that it’ll be held around mid-April.”