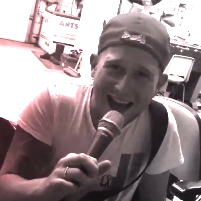 See, we can keep promises. Less than a month after our last update this time. Better than 1,5 year right?

Stef finished his guitar parts! And he even managed to not break his guitar or amp during the process. We’re so proud of him. Like proud parents we filmed all the nonsense going on again and we distilled it into another crappy short video:

You might recognize that song from the last couple of shows we played. Oh and once again: What you’re hearing are (part of) raw, unleveled, unmixed, unmastered, unEQed, un-everything-ed drum & guitar tracks that might or might not end up on the record.

In other news: Goran’s already done with his guitar parts too (dude’s faster than his shadow), but one video at a time right?

Now we’re going back into the rehearsal room for the first time in a LOOOONG time. Time for Emiel’s bootcamp. Time to TURN UP THE BASS.