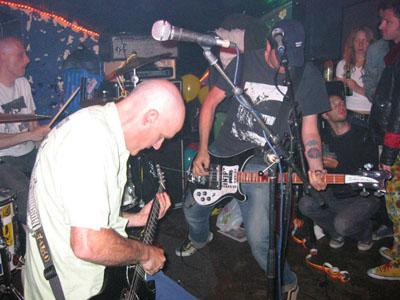 Perhaps the most legendary still active, still kicking ass Dutch punkband has decided to quit because of health reasons. Bassplayer/vocalist Jos (featured with a lengthy interview in SWNK #2) suffers from a serious case of ear damage. He explained it a bit on his Facebook page:

Where normally 140db is starting to hurt your ears, mine start to hurt with 70db. The hearing part of my ears have been damaged by noise and also multiple infections. To cut a very long story short, this means I have to quit playing in a band and also watch live bands.

Guitarplayer Paul had this to say:

Sad but fucking true: SEEIN RED is no more… Jos his severe ear/hearingdamage is not fixable and it seems that there will be no quick recovery either. After having played together in several punk/hardcore bands (Lärm & Seein Red the best known) for more than 30 years!! it all comes to a very weird and bitter end. I’m in a fucking mournful mood.