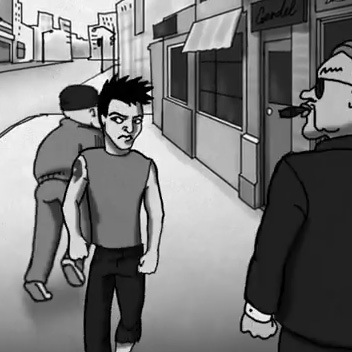 Influential American rock ‘n’ roll band Social Distortion (for who we’re still giving away tickets to the show @ 013) have debuted a brand new video for their song “Gimme The Sweet And Lowdown” from their latest album, Hard Times And Nursery Rhymes. The animated video was created by Olya & Vira Ishchuk (known as “The Mad Twins”) and loosely celebrates the life of front –man Mike Ness.

Mike Ness on the video:

Working with Olya & Vira Ishchuk (known as “The Mad Twins”) was a great experience. I mean, to not give any direction whatsoever and have an incredible video delivered to you speaks volumes. Olya & Vira created this animated piece on their own time as a gift to us, and they nailed it – we didn’t change a thing. Being able to capture the true essence of the song without our input shows The Mad Twins’ artistry, and how talented they truly are. When I was writing “Gimme the Sweet and Lowdown”, the idea behind it was a lifestyle gone wrong due to making really bad life decisions. I never intended for it to be autobiographical, but now with this visual, I realize that it actually is more about me than it seemed when I wrote it.

The video comes as the band is set to embark on the tour of mainland Europe and United Kingdom, in further support of their latest album Hard Times and Nursery Rhymes.  A month-long tour will start in Blackpool (UK) this Friday, August 3rd and include headlining shows as well as the appearances at key music festivals, like Reading & Leeds in UK, Area 4 in Germany and Pukkelpop in Belgium. This tour will also mark Social Distortion’s first-ever shows in Ireland and Scotland, as well as their very first appearance at the Reading & Leeds Festivals in UK, where they’ll be headlining the Lock Up Stage.