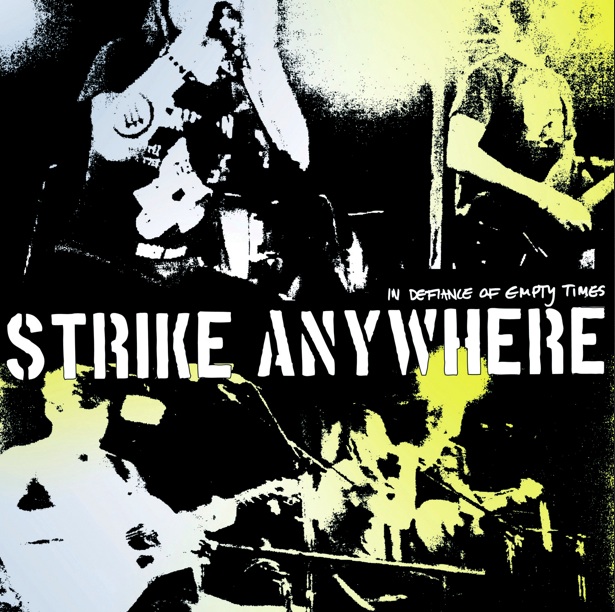 Strike Anywhere’s new release, In Defiance of Empty Times, will be available on August 28th. Two sets were recorded in 2011; in Rochester in July and Richmond in September, and merged together for this very special release. Side Rochester features six songs captured from Strike Anywhere’s acoustic performance alongside labelmates Polar Bear Club, while Side Richmond was recorded during a benefit show for the IWW on the eve of the Occupy Movement in RVA. Check out the new track from Side Richmond, “Extinguish” below or enter a contest on AMPMagazine.com to win a cd/t-shirt package.

Side A (Rochester) is almost like a Peel session to me, an old BBC Radio one recording, or a very heartfelt but musical journey into the melodies and textures inside the songs. There is urgency and melancholy and a clarity of purpose bubbling up out of those acoustic performances that can sometimes get lost or sidelined in the headlong rush of a hardcore show. We’d been doing one-off acoustic shows for years, to benefit causes we support, and just to play our music in a different, and maybe less commodified context. But last Summer, we found ourselves really working out new arrangements and discovering new details in the songs as we prepared for these two events.

Side B, recorded on the eve of the Occupy Movement, shows a rowdy, loud yet intimate snapshot of our hometown at its passionate best. The quiet surprise that’s in our voice is on record, as the songs translated beyond our expectation and simple hopes of transcending genre and seeing what happens without the noise and sweat of a punk show. We find out of course, that the noise and sweat follow, even without amps and pedals! The back end of the record builds into a party atmosphere that shows the songs inhabiting the room beyond us, transforming, then coming back louder and bigger. This is the riot folk for rioting folks.

Also be sure to check out Strike Anywhere on the annual Gwar-B-Q in Richmond, Virginia, featuring the one-and-only Gwar, The Casualties, Valient Thorr, and many others. More information can be found here.

Pre-order In Defiance of Empty Times from the B9Store.