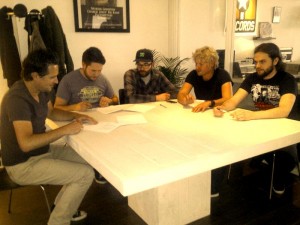 Last week we posted about the Walk In – Play – Walk Out session they did, but yesterday they announced they’ve signed with Suburban Records.

And with that signing they also announced a releasedate.

It’s awesome to see how much this band has grown since the release of their demo in 2006 (which was great already, but I might be a little bit biased since I did the tape release :)) We can’t wait to hear the record.