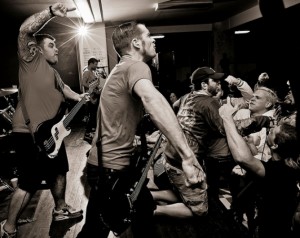 Test of Time started very organically in the spring of 2012 by a group friends with a mutual admiration for the straight edge and a desire to form a band that was different than what is currently dominating the Boston scene. Chemistry was immediate as songs flowed out at an alarming rate.  The band, featuring noted Boston-area photographer Todd Pollock (vocals) alongside Charles Chaussinand (guitar  ex No Harm Done, Offsides, Make or Break), James Christopher (guitar/vocals  ex The Effort), DJ Butler (bass) and Jeff Novak (drums) quickly self-recorded and self-produced their debut 10 song EP Inclusion.  After a well-received release and playing numerous shows with bands they never thought in their wildest dreams they’d share the stage with, Test of Time continued to write material at a steady pace.

The band quickly caught the attention of Bridge Nine label owner Chris Wrenn and the partnership with Test of Time was almost immediate. The band said they are excited to work with Bridge Nine as the label “…inspired us and continues to inspire generations of punk/hardcore music.”  Already having a wealth of songs at their disposal, Test of Time will release a new 7inch, as well as a new full-length LP, in 2013 on B9.

Check out Test of Time’s blog and bandcamp.