The Alligators full-length out this Tuesday on Bridge 9 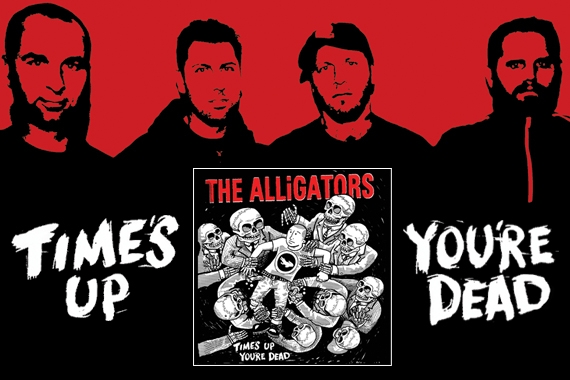 Four of some of hardcore’s most important names from both coasts got together to finally bring back that early 80’s hardcore sound, and this sound is called The Alligators. Featuring members Roger Miret (Agnostic Front), Rich Labbate (Insted), Steve Larson (Insted) and Barret Burt (Insted), The Alligators sound a bit like something that might’ve been filed in between Miret’s primary band, Agnostic Front’s, landmark albums United Blood and Victim In Pain and is undoubtedly an old school hardcore band. The Alligators wear their influences on their sleeve – tipping their hat to bands like SSD, Antidote, Negative Approach, Poison Idea, Scream and more. Vocalist Roger Miret commented, “The Alligators has been a fun side project i’ve been doing with the guys from Insted(California Hardcore band from the 80’s) – an odd fit you might think, but make no mistake: those guys are hard. Rich and I have been friends since the early 80’s and periodically talked about doing music together, so this is a record I’ve been meaning to do for a long time coming. With the addition of DYS and Antidote to B9 roster and the re-release of Agnostic Front’s ‘VIP/United Blood’, we are happy to add this to the Bridge Nine family.”