Token Entry- From Beneath the Streets LP reissue 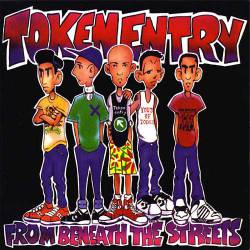 MATW is happy to announce that we are reissuing the late 80’s NYHC classic, Token Entry’s debut “From Beneath the Streets”. After being out of print for the better part of a decade and a half, it will again be available on vinyl in a faithful reproduction of the original on Positive Force Records. The record will be out on December 12th, though MATW is taking preorders now. There will be a limited amount on colored vinyl (100 on purple, 200 on clear). RevHQ will also be taking some pre-orders and they will have a limited amount of the clear vinyl as well. Once it’s out, all the usual suspects will have copies as well.

MR1203 Token Entry- From Beneath the Streets (Mad at the World Records)
MATW is proud to reissue a record that needs no introduction. By the time Token Entry released “From Beneath the Streets” in 1987 on Kevin Seconds’ Positive Force label, they were already one of NYHC’s most beloved bands. Having existed in a slightly different incarnation as Gilligan’s Revenge in the early half of the 1980’s, Token Entry were comprised of scene vets from NY’s hardcore-rich borough of Queens. One of the few NYHC bands of that era that managed to tour extensively, they were notorious for their high-energy shows and their lack of patience for tough-guy posturing. No account of late 80’s, CBGB-matinee era NYHC is complete without this album. The present reissue makes From Beneath The Streets available on vinyl for the first time since the late 90’s, complete with faithful reproductions of the original covers and inserts, as well as a digital download card.