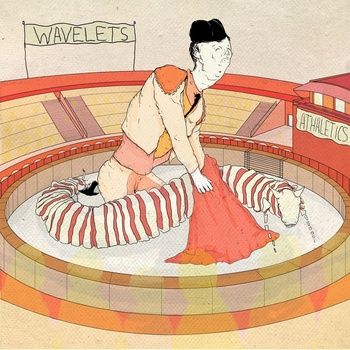 Athaletics, the debut full-length from Gainesville, FL’s Wavelets is now available for pre-order from Tiny Engines. The 12″ LP will see a November 29, 2011 release date, while the digital version is out today via Bandcamp (and can be listened to below) and iTunes. It’s also worth noting that all vinyl pre-orders come with an instant mp3 download for the 9-song album.

Pressed on 180 gram vinyl, Athaletics is limited to 500 on three colorways (75 clear / 150 transparent red / 275 black) and includes a hand-screened insert and an mp3 download code. The first 50 pre-orders will receive a limited-edition, hand-screened print with exclusive artwork by Wavelets’ drummer, Lee Kraft. Additionally, all pre-orders will be entered to win a test pressing of the record.

Additionally, Wavelets was recently included on the Topshelf Records 2011 Label Sampler. This compilation features some of the very best of the underground emo / punk scenes, including Pianos Become The Teeth, Touché Amoré, Moving Mountains, Balance And Composure, La Dispute, Grown Ups, Bars Of Gold and much much more… not to mention most of the Tiny Engines Roster as well.

Recorded by Matt Finch and Ryan Williams at Black Bear Studios (Hot Water Music, Chris Wollard, City Of Ships), Athaletics traverses nine tracks of somersaulting, emotionally charged indie rock (let’s just call it emo) that initially feels a little out of place in relation to the tuneful, gruff punk that Gainesville and its bearded denizens have become known for. Still, great music transcends scenes, genres and geographical limitations; in that sense Wavelets is thriving with its boundless energy and freewheeling, friends-first attitude … not to mention the outfit’s ability to create music that is both intricately complex and instantly catchy. It’s this unique blend of technicality and structural ingenuity that initially grabs our attention, but it’s Athaletics comforting nostalgia and sense of fun that really wins us over and begs for repeat spins. Recommended for fans of Algernon Cadwallader, Street Smart Cyclist and Weatherbox.

Since its 2009 inception, Wavelets has self-released a handful of digital EPs and singles, as well as a 7″ split with hometown brethren, Senders. To download the band’s full discography, go here. Also, if you have an extra minute, do yourself a favor and download the new EP from Dikembe, which features Wavelets front man Steven Gray as well as bassist Ryan Willems.

Finally, don’t forget to catch Wavelets at this year’s FEST 10 in Gainesville. The band will be playing on Friday (10/28) at Bar 1982 with Grown Ups, Spraynard, Go Rydell, Nightmares For A Week and more. For additional information, go here.