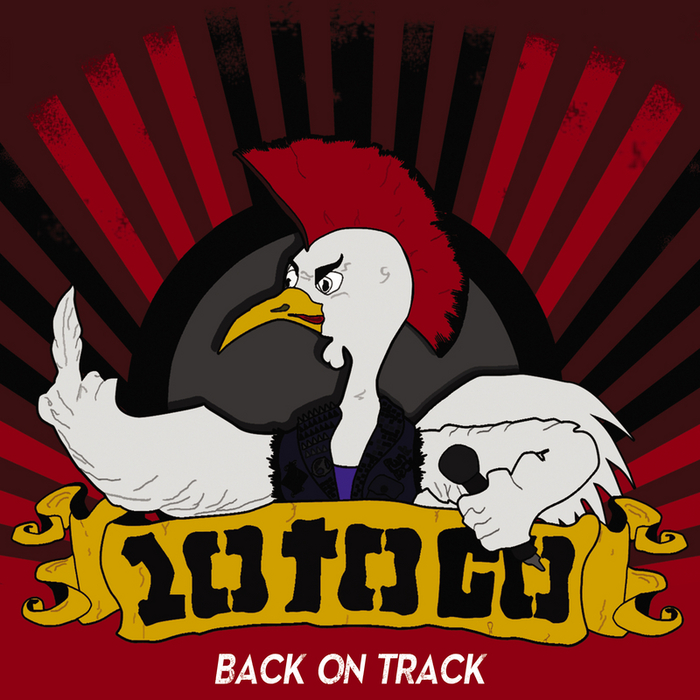 10 to go is a Dutch band from Leeuwarden who started in 2007. In 2009, they released their first album called “attention”. They play punk-rock with ska influences, a style very popular in the 90’s but less played nowadays, though I’m not following this scene very attentively. In this first album you could sense that the band wanted to try different things, integrate some various styles. There’s some mid-tempo catchy melodic punk, some light summer ska songs, and some more street-punk stuff. Though it lacked cohesion this album had some nice sing-a-longs, especially efficient if you were a bit drunk since the melodies were a bit basic and repetitive.

Since then the band has gone from a trio to a quatro by the integration of a second guitarist, and they just released a new album “Back on Track” on Morning Wood records. I approve the name of the label BTW, but that’s not the subject here!

It’s clear that they have progressed as a band since their first album 5 years ago. They play together much better, and of course the production is better. The band have actually given up a bit their melodic punk influence, and are more working towards a street-punk sound, the kind of music that you listen in dirty squats in the middle of an industrial zone. We’re far here from an early Fat Wreck/Epitaph sound. Though they haven’t totally given up the ska influence (Coming home), or the skate-punky stuff (Squander).

The album is much more pleasant to listen as a whole than the first one. I thing the songs are sometimes a bit long though, they would better if they’d be more to the point.  Sometimes I do miss the aggression that should I think be present in punk-rock.

As a whole this is definitely a pleasant album. I do think the band puts a lot of efforts and works on it which is always nice. This album has a definitive cohesion. I’m not sure it’ll appeal to every SWNK reader, but if you’re into this kind of music it’s definitely worth listening. And oh yeah, it’s much more pleasant to listen with a beer!

PS: As a side note, it would be nice if for digital downloads the label will also give the lyrics (or at least the scan of the inserts).