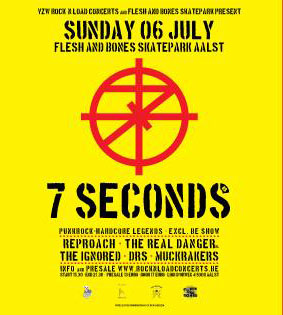 What better way to spend your Sunday than by getting in the car with two great friends, head over to a skate-park in Belgium and sing ‘Young Till I Die’? Well maybe by recovering from Saturday’s soccer match, or by getting your bike. So yes there are other ways to spend your Sunday but I and many others choose to see 7 Seconds.

So Aalst, near Brussels, is probably not on the list of most beautiful places in Belgium. Or as a wise lady told me not that long ago the closer to Brussels, the shittier it is. Well Aalst does have a large indoor skate-park. Including a large store for all your skateboarding gear and a small shoe box shaped room that could be used as a venue.

Since a man (and woman cause it’s not just boys fun) has to eat upon arriving we first got in line for some frieten. Shortly after The Netherlands own The Real Danger kicked off their set of fan favorites like ‘Guitars’, ‘No Way Out’ and ‘Cigarettes’. This band is always good, even when the singer is recovering from the Saturday before and the bass player from surgery on his wrist.

Reproach made up for Belgium being kicked out of the soccer tournament with their ferocious set of trashcore. People started to pull and move and before you know it there was action upfront. A good old fashioned pit with people ‘flying’ from one wall to another.

Outside that room however the drummer from 7 Seconds started his warming up routine that lasted a whole lot longer than the Reproach set. Kind of cool to watch as well as Michiel The Real Danger cruising through the skate-park.

7 Seconds. One of those legendary names in hardcorepunk that makes people want to walk together and rock together. From skaters to crusts to clean cut youth crew kids to real punks. They’re getting old (the bass player had to reach for his puffer after one song) but damn they’re still good. Yes by now covering ‘If The Kids Are United’ and ’99 Red Balloons’ is kind of a drag. At least that’s not what I want to see them play.

The band burned through all of their own hits as well. ‘We’re gonna fight’, ‘New Wind’, ‘Walk Together’, ‘Young Till I Die’, ‘Regress No Way’. Plus a couple of songs from their new record and some songs from their previous two releases. The band seemed to be really enjoying in a small packed venue with stage-dives and singalongs and did two encores.

It’s that my left leg still hurts like hell otherwise I would have had a field day. Skateboarding and 7 Seconds, things don’t get better than that.