Abolitionist – It Used To Rain 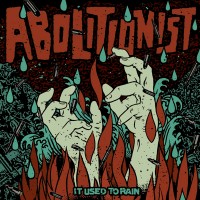 What’s up with hardcore and punk bands these days? It seems like everyone is making concept albums. Well as long as that leads to great records like Defeater’s Empty Days and Sleepless Nights and Fucked Up’s David Comes To Life, we shouldn’t complain. It Used To Rain by Abolitionist is a concept record as well, but is it any good?

It Used To Rain is the story about a world where it hasn’t rained in two years. There’s a shortage of water, people start to riot and shit hits the fan. Gas cans rattle along the streets. People machine gun each other for precious liquid. Fire rampages unrestrained. Although the album doesn’t have a narrator directly, the album seems to follow a single individual as he treks through the arid wasteland, confronting others and struggling for life. In a way the ten songs on It Used To Rain create a world similar to that of The Walking Dead comics and tv show and the book and movie The Road. Wherein people fight eachother over something that’s very common in real life. Yet if you’ve seen the documentary Blue Gold the story that Abolitionist sketches comes a lot closer to home.

So lyricwise It Used To Rain is a very smart and well done record. Fortunately the band is able to match the same level musicwise. Abolitionist have this very original mix going of a more punk Against Me!, Jawbreaker and a hint of Dillinger Four. The band doesn’t sound exactly like any other punkband I knew and truly manages to have a sound of their own. To answer the question in the beginning of this review: Yes, It Used To Rain is very good. I’d go so far as to say it’s the most inventive and original punkrecord I’ve heard in the past years.