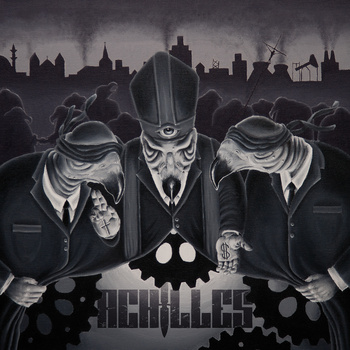 So yes, it’s called Vul†ures and it was made in Sweden by a band named Achilles. These guys hail from the small town of Oskarhamn, combining crustpunk with metal and d-beat. Surprisingly, the other element they incorporate is postrock.

Sounding a lot like His Hero has Gone, the band has moved on and gets comparisons with Tragedy and Converge. Members have been active in other bands like Sick Rose, The Arson Project, First Cut, Matter Of Fact and Helvete, so these guys have some experience under their belt. Previously, the band was known as Achilles Last Stand.

Raw, turbulent and intense the record bursts loose. ‘Füllstandigt Jävla Död’ has shouted vocals and a continues layered guitar sound, that reminds a bit of primitive black metal bands like Darkthrone. Guitar feedback interrupts the wall of distorted guitars for a moment now and then. A bit more hammering is ‘Suicide Reign’, which has pounding riffs and drums at the start with barked vocals in the background generating an angry atmosphere, before breaking down into an even slower pace.

There’s definitely a lot of anger to this band and even though they never reach the complexity of a band like Converge, they demonstrate a knack for making good, coherent songs on ‘All For Hell’ that definitely demonstrate that black metal inspiration you can also hear in bands like Kvelertak. The record closes with ‘Like Vultures’ which basically sums up the grim atmosphere this band creates. On this song we also get the postrock influence, when the song slowly ebbs away in it’s last minute, before swelling up for a moment again. The band takes a couple of influences and successfully turns them into their own sound.