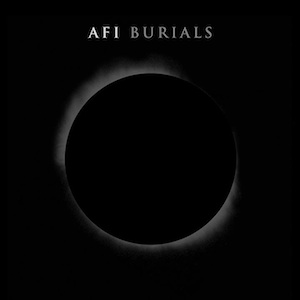 There are lots of ways to gain momentum for your upcoming record or show. In the old days the guys of Black Flag would go about roaming the city with some spray paint to cover the whole area with the famous bars. There was also the time when bands would release a forthcoming track on a sampler or put out posters everywhere. Not many bands have been teasing and warming up their audience as much as AFI has this year. There were symbols, smart trailers etc. It’s great to put much effort in a campaign focused on letting people know there’s new material on it’s way, yet the product you’re promoting has to be really good if you want to avoid disappointments.

AFI has a great track record when it comes to disappointing their fans. Ever since their transition from a skate punk/hardcore band to a more goth punk band to whatever they’re now AFI has been losing fans. Though I personally love the old style of Black Sails In The Sunset, I also like the approach they took for Sing The Sorrow, and I’ve grown to love the poppy Crash Love.

Lots of people were hoping the band to return to Sing The Sorrow since the promotional campaign for Burials hinted at a more dark, sinister and harder record. Well one more time AFI is here to disappoint. Burials is something of a merge between the dark vibe of Sing The Sorrow and the more goth pop approach of Crash Love. Mr. Havok is started to sound like Robert Smith (The Cure) more and more and there’s no lack of desperation and love on Burials. Yet it’s a very strong album. Probably their best one since Sing The Sorrow. There’s a lot of variation and some of the best songs the bands has written so far. Lyric wise it might be a bit too much on the ‘heartbroken, I’m crying’ side but they deliver it well.

I personally like it when a band manages to surprise and deliver after years of making music. AFI hasn’t lost a ‘fan’ in me yet.