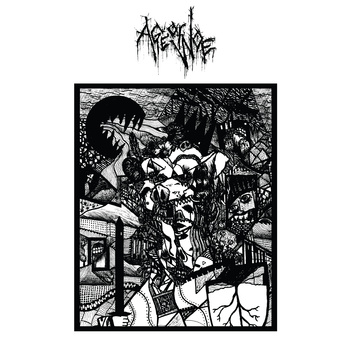 Age Of Woe plays dirty hardcore with clear sludgy components and a wiff of hometown Göthenburg’s death metal scene about them. That makes them an interesting band for those who like the gritty sound of Entombed and the pumping rhythm of High On Fire.

Other comparisons thrown on top of the pile are various. Let’s just say that Age Of Woe dwells somewhere in the old, hammering, sludgy death metal vibe of Unleashed, At The Gates and Nihilist. It creates an album that is generally entertaining for those who like this sort of musical brutallity. Songs like ‘Like Embers’ are impressive, long and dragging you through the mud as a listener. Dark, damp sounds beat away at your eardrums.

‘The King Of Thieves’ picks up the pace with again those murdering rhythms that pound on and onwards, gritty vocals bark the lyrics over those as if barely holding up that voice. A bit more melody is introduced in ‘The Antagonist’,  generally more speed changes and diversity. This doesn’t prepare the listener to the darkness that feels like a bath around you on ‘Black Rain’. The song practically spins out of control into a wall of sound that embraces the listener, rolling on for almost seven minutes.

‘At First Light’ demonstrates a certain love for hardcore music, which is clear in the opening vocal style. The rhythm and also the title give a feeling of reference to Bolt Thrower though. A bit more groove and a Kvelertak sound could be heard here too, now it’s more Darkthrone at times. Even more on the songs ‘Red Eyes’ and ‘Cold Cycle’. The album closes with the gritty ‘Rite Of Passage’, with some buzzing distortion on the guitar play that gives a nice driven sound to the song. These guys delivered an open and entertaining album.