All On Black – Weightless 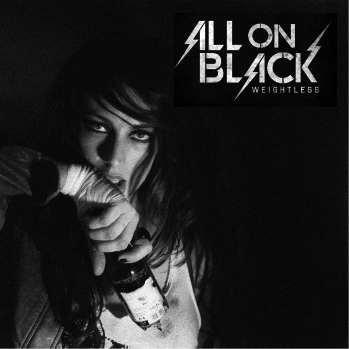 Remember Razor Crusade? That first MCD was really good, but when their singer had to go fight ninja’s in the East and Ivo took over vocal duties it opened up a whole new world for them. I just loved Ivo’s voice. So when he asked me if he could send me the full length of his new band I said yes right away. He just wanted me to hear it, but after listening to it I knew I had to write a review on it. So here I am, trying to convince you, reading this, why you need to give All On Black a chance.

Let’s start with eliminating our audience first. If you’re looking for heavy breakdowns and two step moshparts, I’m not even going to try, this is not for you. The same goes for people who want to hear faster-than-the-speed-of-light riffs with over the top screaming, you’re simply not going to handle the sweetness of these songs. There’s not a whole lot of fingerpointing going on either, so I guess the oldschool is out of luck too.

So, anyone still reading? Great, I guess we eliminated all the naysayers and closed-minded people by now. Let’s get straight to  business, All On A Black is a five piece featuring (ex) members of Razor Crusade and Omission amongst others. Both bands are a lot heavier than what All On Black is doing though. Not that you’ll fall asleep during an All On Black show, but it’s all a lot sweeter and less raw. A bad thing? Not at all. Just different. To give you an idea, I can see these tracks being played on the radio without  a doubt.

Weightless has a great production but I refuse to call it sounding ‘international’. It’s such a cliché and in a way an insult to the Dutch scene. But I guess people would describe this record like that too. Not only is it full of insanely catchy choruses, the riffs itself are damn catchy too. And it’s in balance, from upbeat rockers like “Stay Away”, “Someplace Someday” and “I Know You Know” to an acoustic song like 11 September that reminded me a bit of the Get Up Kids.

Nothing to complain? Of course there is. I could have done with even more of a ‘raw’ edge here and there. But that’s just me, I’m a sucker for that, the record is fine as it is. Oh and when I read ‘Stay Away’ amongst the tracktitles I hoped for a Nirvana cover as good as the one Charles Bradley did recently. Turned out it wasn’t a Nirvana cover. Oh well. Can’t have it all right?

I guess you get the picture by now. I have no idea what labels are currently doing, but they’re clearly not paying attention, instead of waiting for the next hype to sign, you might want to try All On Black. They’re still looking for a label to release this record. Unbelievable.

In the meanwhile listen to “Won’t Last Forever” the track they’ve made available already:

Band: All On Black