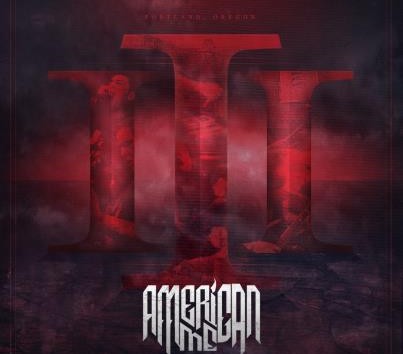 I’m not sure what really prompted me to plump for this American Me album when looking at the massive list of records available for our listening (dis-)pleasure at the moment. I suppose I already had a few preconceptions about what the record would be like, but I guess it was more idle curiosity than anything else. It’s been a while since I donated any time at all to music like this (so much so it took me this long to get round to reviewing it, huh Pim?), but I was intrigued all the same. For the the readers who haven’t come across American Me before, which I would imagine is quite a lot of you, they play the lumbering style of beatdown metal predominantly pushed by the likes of The Acacia Strain or On Broken Wings, that you can vaguely trace back to hardcore bands like Bulldoze and Stout etc. American Me, surprisingly, are from the US, and III is their imaginatively titled third full length, released by the purveyors of the finest heavy music in recent years, Rise Records (if you didn’t detect the sarcasm in that sentence, you should probably press the red X in the top right about now). My only previous experience of the band was hearing their debut EP a few years ago, which I recall had a ridiculously heavy intro but I felt never really delivered after that. However, a lot could have changed since then…

…It hasn’t. I must have listened to this album thirty times in the last week or so, and I’d still struggle to distinguish this from the first American Me album, or even another band playing the same style. Ordinarily, especially when it comes to bands at the heavier end of the spectrum, I’d be a strong proponent of ‘If it ain’t broke’ etc etc, but this album never at all grabbed my attention with a cool riff or a great breakdown. Rather, the whole twenty minute affair simply became a long cycle of indistinguishable chug sections broken up by the occasional faster drum beat. I wouldn’t usually push for bands playing this kind of music to exactly reinvent the wheel or anything, but I never got the sense American Me were looking to do anything new with this album, or surprise the listener at all. There’s an abundance of sections on this album comprised entirely of open palm guitar chug, and while I do like the singer’s vocal range, as his strained shouting is a change to the squeals and screams I usually associate with this sort or metalcore; it just leaves me feeling a bit unfulfilled, really. Thirty notes from the A and E strings, a pinch harmonic and then another thirty at half tempo accompanied by blast beats does not a hard song make. The other issue I have with ‘III’ is more something I can level at a lot of bands playing music like these days. What is this guitar tone and production that seems to have come to prominence in recent years? After extensive thought, and even consultation with friends, the best word I can use to describe it would be ‘digital’. The production seems to be balanced in the favour of ‘clarifying’ the guitar notes, that in my opinion has resulted in American Me, and a lot of other bands like this, playing beatdowns that just sound hollow and tin-like. I’ve always been firmly in the analogue school of thought when it comes to heavy music, so if these bands attempts to sound polished and well recorded have removed the heavy aspect, what is the point of this sort of music?

To surmise, I feel like there’s very little on offer here to set American Me apart from there many hundreds of peers in the scene, although at the same time, I’m sure a huge number of people in garish shirts of bands you can’t read the name of will find this record to be hugely enjoyable, but it’s definitely not for me. Do yourself a favour and go listen to a Bulldoze record instead.