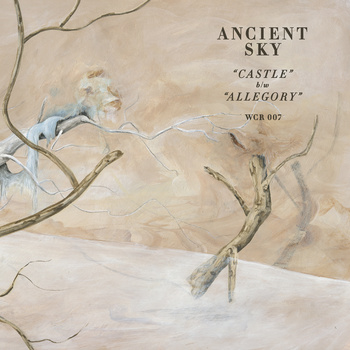 The band Ancient Sky basically released two songs of their swirling neo psych and titled that Castle/Allegory. Accordingly, one could say. This 7″ gives a taste of the album, which is out now. Let’s start with this.

Droney psych doom is what they call their own sound, which has a Led Zeppelin style primitive build up, merging into the more recent psych sounds like that of Radar Men From The Moon. These guys from Brooklyn have already gathered plenty of experience in other bands. Majority Rule, Verse En Coma, and You Are The Drum. Fun fact, originally the band featured members of metalcore outfit Darkest Hour.

‘Castle’ slowly comes on, speeding up now and then to give way to some harsher guitar work, but mainly focusing on overlaying the sound with psychedelic guitar streams that give it some cosmic characteristics. Maybe a bit of Astrosoniq meets the Beach Boys with the slow sung sunny opening of ‘Allegory’.

The jangling 60’s pop vibe gives the slow cascading sounds of the second song a whole different autumny gloom. The band clearly knows how to play and has definitely made me curious for that full length of Ancient Sky.