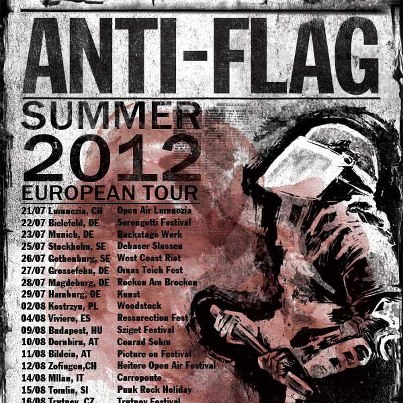 For those who grew up in the mid 90’s punkrock and hardcore scene in the Netherlands, the W2 is one of the most iconic venues still around. It’s the place where I saw bands like Battery, Shelter, H2O, Strung Out, Good Riddance, AFI, Warzone and the list goes on. Every other weekend there seemed to be a Sunday matinee. Or that is the way I remember it.

The past ten years the W2 has cut back on the amount of hardcore and punk shows but every once in a while they have a decent line-up. Since I had finished the current book I was reading and hadn’t seen Antillectual in quite a while I thought let’s go crazy and go to a show on Monday.

Canada’s The Flatliners had a day off on tour and played in Aloys, Eindhoven the day before. They heard about the Anti-Flag show and got added at the last minute. It was my first time seeing them and though they play a tight set I couldn’t get into it. I thought the band played some average Fat Wreck Chords punkrock without memorable hooks and melodies. Still the band got some of the crowd moving and the first pit was a fact.

The last time I’ve seen Antillectual was in Sneek when they opened up for The Get Up Kids. Back then they had a fill-in bassplayer, so this was my introduction to the not that new line-up with Glen on bass. The band played lots of material of their last record Start From Scratch but also played some songs of Testimony and even Silencing Civilization I think. Willem’s voice was even better than I remembered and the band sure showed both not Dutch bands that The Netherlands has at least one very good punk band. The band played two songs which will be on a new EP that’s going to be released next month on Shield Recordings. Looking around I saw some members of the legendary Undeclinable Ambuscade in the audience bopping their heads which means it was good.

After having seen Anti-Flag on multiple occasions their show just isn’t a surprise anymore. They will never take a conservative stance or ask the audience to really hit each other while slamdancing. This time I felt misplaced when I saw all the young suburban white kids singing along to a song like ‘Fuck Police Brutality’. It’s simple sloganeering and I kind of get it, I was young once as well. But how many of them do have experienced  police brutality? Anti-Flag played a solid set covering songs from their early records up untill the recently released General Strike. The audience was into it and moved a lot considering it was a Monday night. But it wasn’t the most memorable show in the W2 I’ve witnessed. Then again it might have been one of those first and very impressing shows for some of the other people. Let’s hope they’ll find their way back to the W2 for more punk and hardcore shows.