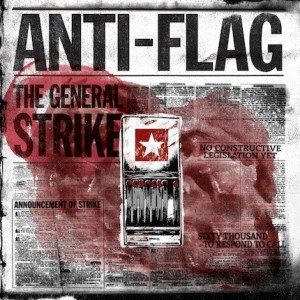 Anti-Flag sure took their time releasing their first album Die For The Government (which came out in 1996 but the band originates from 1988). Since their debut they however have been releasing records once every two years. The General Strike, their latest, is number nine. Not many bands still around can look back on such a consistent discography. In many ways one of the few bands that come to mind is Sick Of It All who’ve also kept putting on quality releases, went on a major label at one point in their career and went back to independent labels without losing much of their integrity.

Musicwise Anti-Flag has pretty much kept going in the same direction. The General Strike is more of the The Clash pre-Combat Rock combined with political lyrics. Yet if one listens to 2008’s The Bright Lights Of America and 2009’s The People Or The Gun there are some apparent differences. The Bright Lights Of America, produced by Tony Visconti (Morrissey, T.Rex, David Bowie), saw the band taking as much as possible out of the major label budget which led to a record with children choirs, cellos and horn sections. 2009’s The People Or the Gun was recorded and produced by the band themselves and features a more stripped down sound including parts of the folk punk scene. While The General Strike is once again recorded and produced by the band the record is a bit harder and less folk that The People Or The Gun.

One of the stand-out tracks on The General Strike is 1915 which according to the band is about the activist Joe Hill:

Joe Hill may have been the first punk rock musician. He didn’t have the same aesthetic to his sound, but he certainly had the attitude. He fought diligently for human rights. He questioned nationalism at what we can only believe was it’s peak. He inspired so many people while alive and for sure even more after his death. He was killed in November of 1915 by firing squad for what many believe was a murder he did not commit. Joe believed he was worth more to the labour movement as a dead martyr then if he was alive.

The Ranks Of The Masses Rising is another great example of Anti-Flag sounding much like a current version of The Clash:

And The Neoliberal Anthem is for sure going to be one of the better Anti-Flag songs for festivals:

The General Strike is not a real surprise to anyone who has heard Anti-Flag before, nor will it be the release to gain a whole legion of new activists, but one can have nothing but respect for this band who have stayed political and on point.

Label: Side One Dummy Records