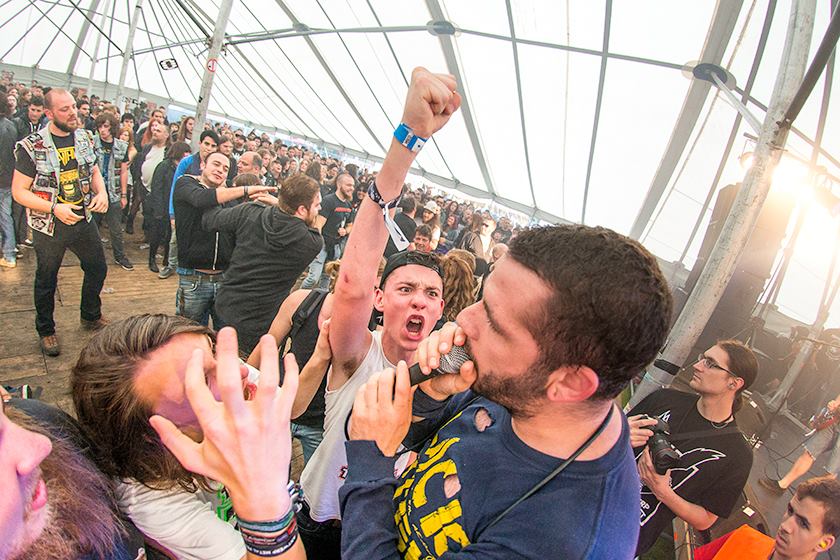 Every Belgium town seems to have at least one outdoor festival with metal, hard rock and or punk rock bands playing. Antwerp being one of the largest city’s has one as well. A two day festival in a park on the outskirts of the city center. And while it’s titled Antwerp Metal Fest, there were also some real hardcore bands on the bill. Here’s my review of day two ( I wasn’t there for day 1).

Rain is a real festival killer. Things get muddy and people get grumpy. Fortunately it didn’t pour the whole day. Belgian hardcore band Pushed Too Far played early in the day to not so many people but they did give off a lot of energy.

Literally the highlight of the day however was Toxic Shock. While singer Wally is no new Zoli Teglas he is one of the craziest guys on stage in Europa. This time around he climbed on to the stage monitors, cut one of his eyebrows by smashing the mic into his face and to top it all he climbed to the top of one of the tent pole’s. The audience was into it and a great trash pit went on during their set. The band is recording new songs for a split ep with Iron Reagan so next year Antwerp Metal Fest can expect even more madness from these local heroes. 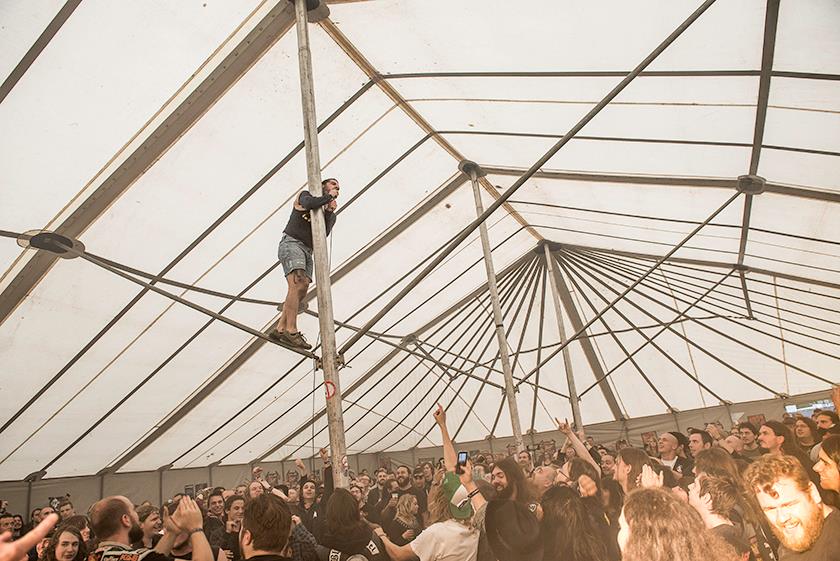 Herder played right after Toxic Shock and though entirely different people seemed to be enjoying the Dutch masters of sludge as well. Che is an impressive front man and knows how to work an audience. Head banging and middle fingers all over the place.

No Turning Back headlined the Marquee stage. Martijn spoke on how he used to go to the Dynamo Open Air festivals to see bands like Machine Head and Madball and how much an impression that made on him. I did see lots of younger kids at Antwerp Metal Fest who soaked in the crazy antics of Toxic Shock and the groove of No Turning Back. Who knows which bands these kids will start someday. No Turning Back didn’t play their best show ever but the managed to keep even the biggest metal head in the tent.

To close of this years edition the organizers got the legendary trash band Exodus. Though I’m unfamiliar with most of their songs even I could see here was a band playing trash metal at it’s very best. Including a singer who repeatedly asked the crowd to put their horns in the air (and who thought the festival was called Antwerp Open Air.)

For someone hardly into metal music I did have a good time at Antwerp Metal Fest.