Apologies I Have None – Black Everything 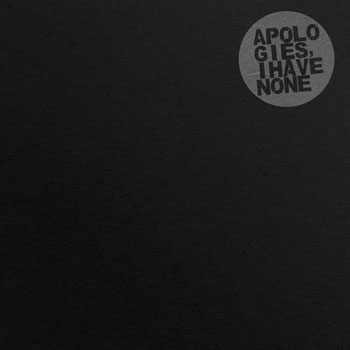 Slowly but surely and with a lot of touring Apologies I Have None have become one of the more popular punk bands emerging from the UK in recent years. Their 2012 full length London is a masterpiece on itself. Expectations were high for this new ep even though one of the key members has left the band.

But wtf. Is this Apologies I Have None? The band with brilliant melancholic songs? ‘Raging Through The Thick And Heavy Darkness Of  A Bloodlust’, the opener of this ep is nothing like I hoped it to be. The song sounds like Radiohead doing Boy Sets Fire and is a huge disappointment being the first new AIHN song since London.

Fortunately things do get better with ‘Two Bombs In A Box’ which sounds more like the band as we all know them. ‘Coffee, Alcohol, Codeine, Repeat’ has a great ending and the last song on the ep ‘The Clarity Of Morning’ has the bleak melancholic sound that’s become a trademark for Apologies I Have None.

Still Black Everything is disappointing. Where the band goes beyond their trademark sound they fail miserably (opening track) and the other three songs aren’t as good as the stuff previously released. Maybe it’s all just a bit too desolate and depressing this time around. The ep misses one uplifting, fists in the air,  feel good song. The band was right naming this ep Black Everything, but it’s too black.

Band: Apologies I Have None