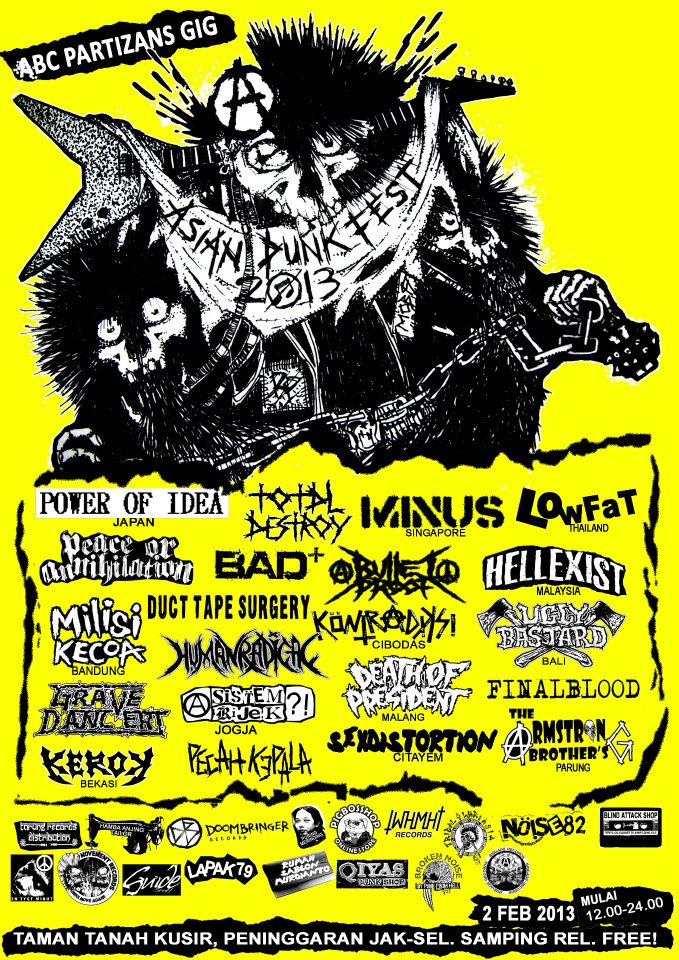 There was a big punk festival here in Jakarta last week and I was stoked to be there. It is called “ASIAN PUNK FEST 2013” but mind you that this is not THE FEST, CHAOS IN TEJAS, or the REBELLION FEST, no, not even close, so we do not have the luxury to see those super dream band [insert your favorite 80s or 90s Hardcore Punk bands here] that everyone always talk about. Actually, the idea behind this fest is simple: there will be a bunch of punk bands from neighbor countries coming here around the same time so why not put them together in one day and call it a fest. This fest, in my opinion, is done by the punkest way possible. Picture this: there is no charge to get in (yes It is FREE, how cool is that?!), you get to see twenty something punk bands from Indonesia, Malaysia, Singapore, Thailand and Japan playing in one day, no sponsors whatsoever, the fest ran by the punks and for the punks (no promoter bullshit and 100% non-profit), and the location is right next to a railroad and ten seconds away from one of the biggest graveyard in Jakarta. 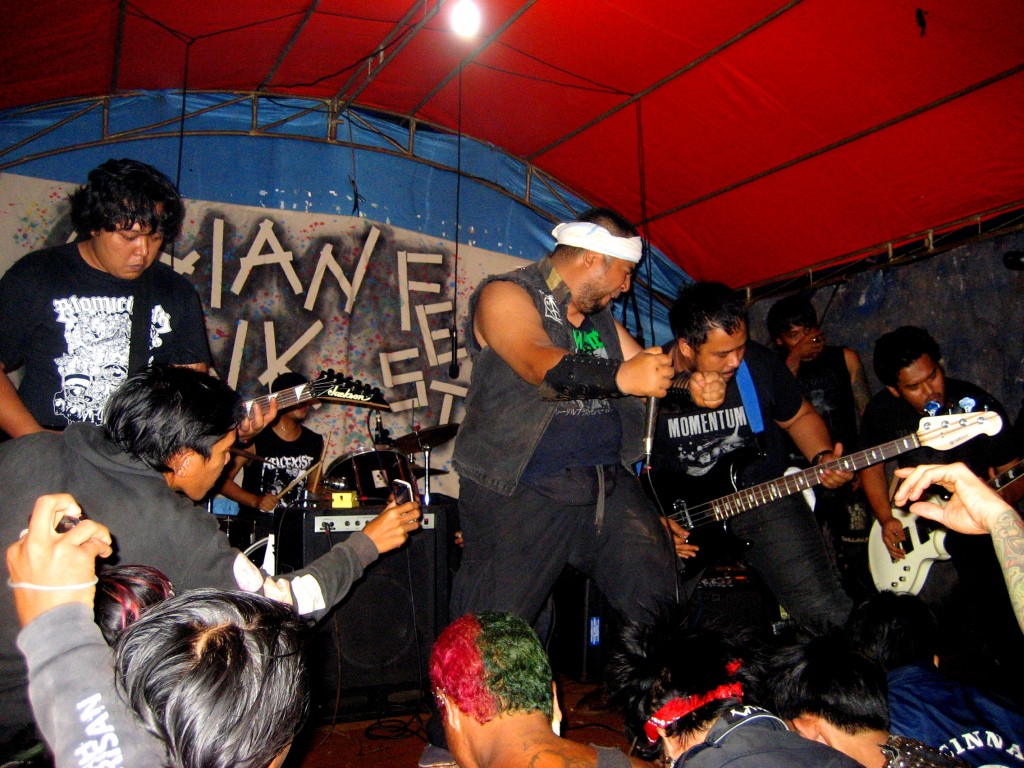 I was up early on Saturday to take my friend Nanda to the venue with my motorbike. He is in charge of setting up the sound equipment and I was supposed to help him out but I got to go to work; I work as a part-time teacher in a language institution and I have classes during weekends. When we were on our way to the venue, we got stopped by the pigs… I totally forgot that during payday week, the pigs will come out on the street and try to scam people with bullshit because they know that most people just got paid and they simply want a share, how fucking ridiculous is that. The usual conversation is like this: “can I see your license sir? I see that your light is not on, your side mirror is broken, and [insert more bullshit here]. I can give you a ticket and take away your license or you can skip all that and just pay me here so what say thee?” Our choice was court so they gave us the ticket. That is one of the reasons why most of us will forever hate the police. A.C.A.B I say!! 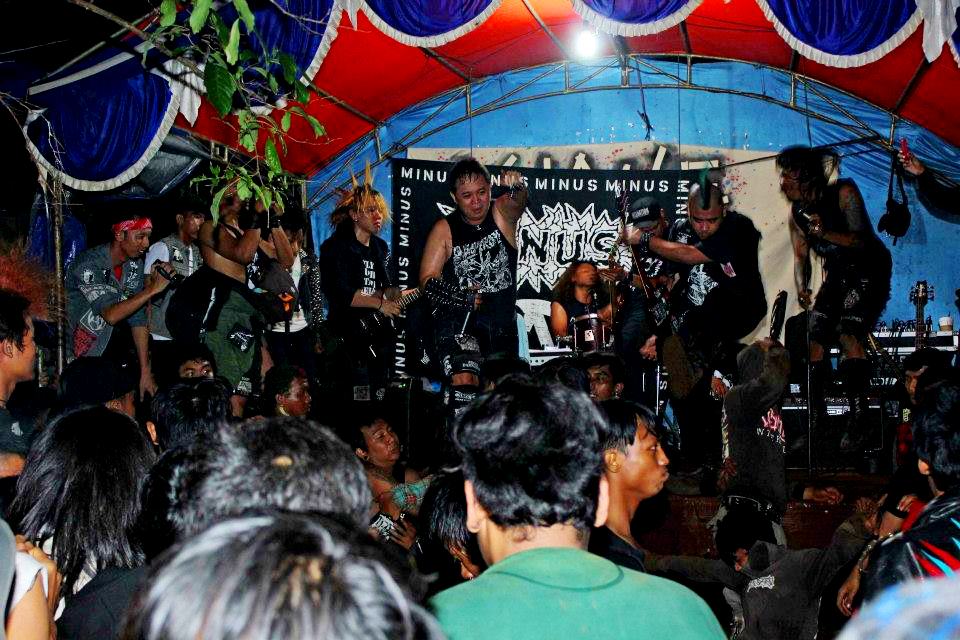 It started to rain when I reached the office and it lasted for quite a while. That means, the land condition of the fest will be ugly so I took a self-note: wear a shitty shoes (boots is more appropriate but sadly I do not have one, maybe I will get one in the future when I have extra money). After I got off, I went home to change my shoes and go straight to my next destination: the Grand Plaza… I had to be an emcee in a shopping mall, how silly is that. If Punk is an RPG game, I could lose ten thousand life points by doing that. Nothing interesting happened during my emcee hours so when my work is done, I head up straight to the fest, hell fucking yeah!! At last!! 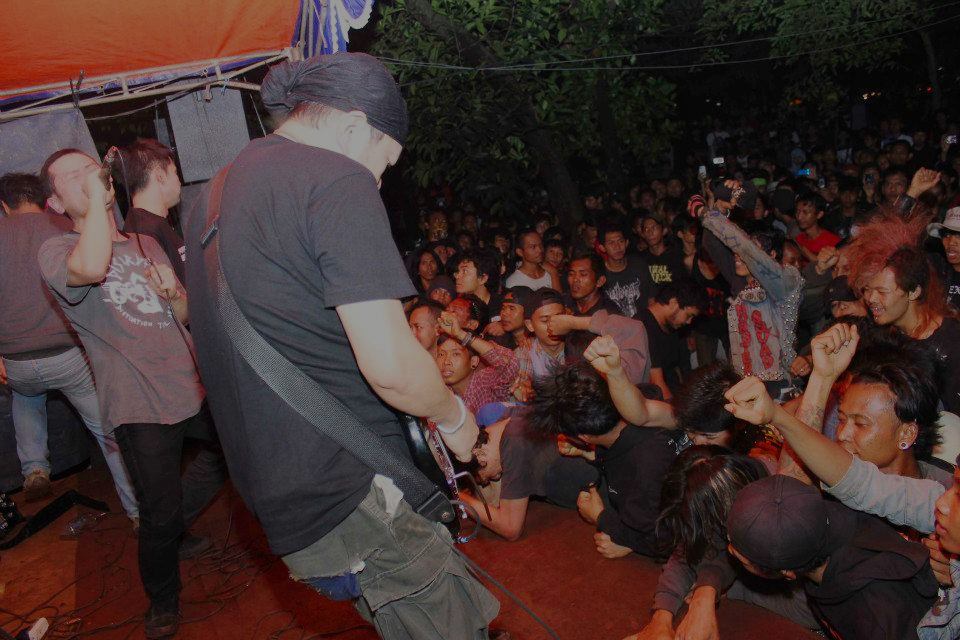 When I got there, I already missed too many bands, the place got very dark because there were not enough lights, and apparently there were several big fights going on. It seems like everybody knew about this Asian Punk Fest so we got many people coming from outside Jakarta, I even saw some foreigner looking punks walking around drunk and merry. The area was instantly occupied and surrounded by punks from all over… it was a beautiful sight really, it makes me feel like I am living in a punk state utopia and because of that my friend, I started to drink much and lost focus on the show. I drank, I moshed, and I had a good time. Some of my favorites are: UGLY BASTARD (Bali), they play raw noise punk, not very different from Disclose, D-clone and the likes and oh by the way, they do not sound like the Casualties so any jokes about their name and the Casualties are acceptable ha!. I do not know where they got their energy from but they fucking kill it live, definitely worth checking out. Next favorite is POWER of IDEA (Japan), they were phenomenal… they have been around for long time and is one of the respected hardcore punk band in Japan. They mixed a good amount of Trash, hardcore, and punk in all togetherness for the sake of awesome music. DUCT TAPE SURGERY from Jakarta and LOWFAT from Thailand deserved an applause for being the only 80s DC style hardcore band on the fest and their music rules, seriously go check LOWFAT on your favorite browser when you have time. HELLEXIST (Malaysia) plays metallic crust in the vein of Tragedy and His Hero is Gone, their heavy sound is perfect for awaking the dead across the street. Nevertheless, All the bands I saw were amazing live, there were too many technical problems onstage but hey I was hepped up on goofballs and maybe they were too so they carried on with no single fuck given and everybody enjoyed it. My big applause goes to Death of President (great hardcore punk band from Malang) for playing with no distortion due to technical problems. In the end, the show got cut off around midnight, the police came, and surprisingly nobody got killed from being too damn near from the railroad; crazy stuff. 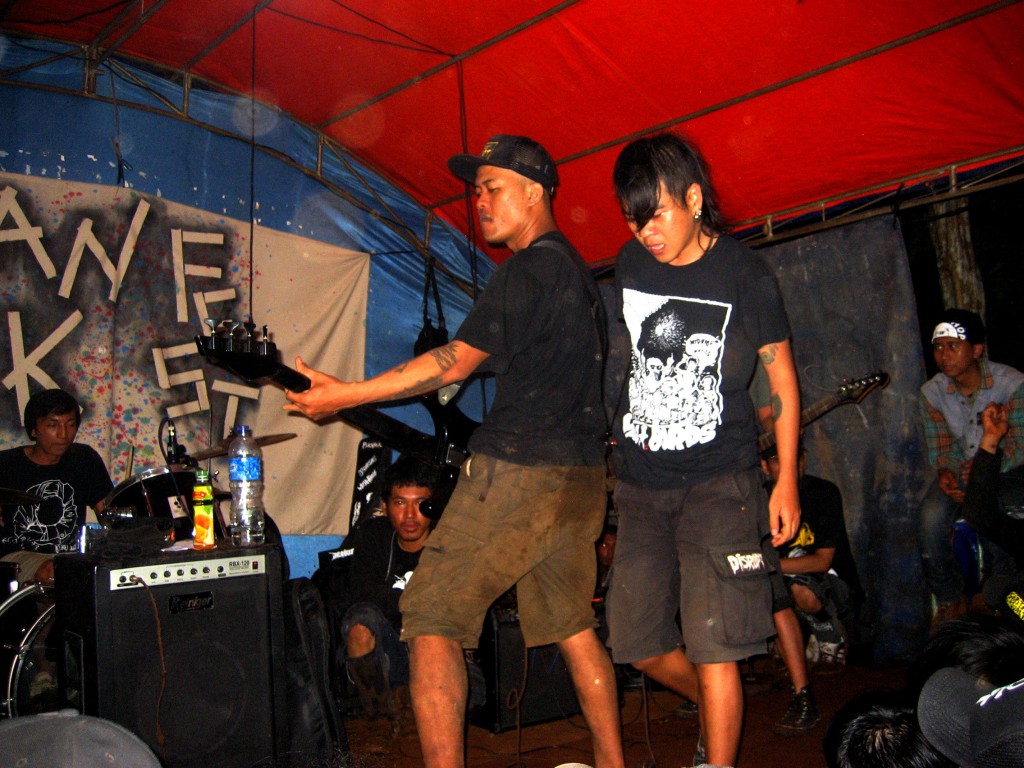