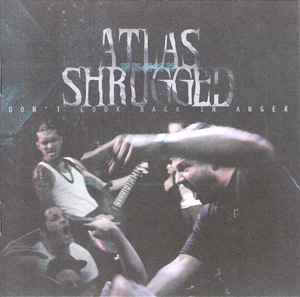 I first heard NYC’s Atlas Shrugged in 1997 or so when I picked up their split 7″ with New Day Rising. I got it cuz of NDR, who I loved (and still do), but quickly found myself loving Atlas Shrugged’s side as well. Unfortunately I was a bit late to the party, cuz AS broke up in 1998. They were never a big name out here, but that didn’t stop me from hunting down their releases over the years. And even though the band quit in 1998, they recorded 2 more releases since then, the ‘Vigilante Songs’ MCD in 2007 and the ‘Smile Songs’ 7″ in 2012, which a precursor to this discography CD.

Atlas Shrugged’s music is not easy to define. Imagine a love-child between Burn and Absolution mixed with hints of Quicksand and Cast Iron Hike, without sounding like any of those bands. Coupled with Chris Weinblad’ distinctive and passionate voice, which alternates between speaking, shouting and singing, it made and still makes Atlas Shrugged stand out from their peers. One thing I always appreciated about Atlas Shrugged were Chris’ lyrics, which have a poetic and personal edge that somehow spoke to me (the line ‘I follow myself inside, a hollow passage in time‘ has been stuck in my mind since I first read/heard it, I can’t explain why though). Listening to this CD and hearing all their songs together also made me realize how much Chris’ vocals have evolved (and yes, improved) over the years. While I love ‘The Last Season’, it is the weakest AS release in terms of production (it’s thin and lacks punch and clarity) and vocals. But the band was still in its infancy, so it’s understandable. The difference between that release and all subsequent releases is quite big, so maybe it’s good it ends the CD as it’s maybe not the best starting point for getting to know this band.

This discography is clearly a labor of love. The booklet has a lot of pictures, as well as lyrics to all songs and liner notes by Chris for each release. This CD starts off with their most recent release, the ‘Smile Songs’ 7″ and then goes back in time to end with the earliest (non-demo) AS record, their ‘The Last Season’ LP. That LP was the 1st release on Trip Machine Laboratories in 1994, which is Chris Weinblad’s own record label. TML also put out this discography CD. And to complete another circle, one of the songs from their ‘Smile Songs’ 7″ was written in 1992 when the band had just started, and the other one in 1998 when the band folded, neither song was recorded at the time. Thankfully they decided to record em now, both songs are awesome. The band also paid tribute to their NYHC roots by covering ‘Vigilante Song’ by late 80’s NYHC band Altercation, as well as naming their MCD after the song.

Atlas Shrugged was never a band that received a lot of exposure, but hopefully that will be rectified with this release. I love this band and cannot recommend this discography enough.