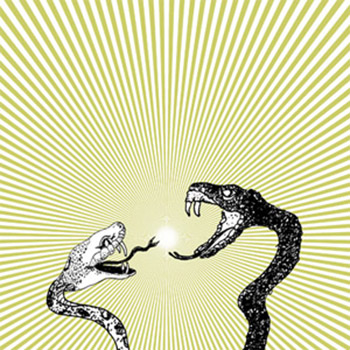 It doesn’t happen that much that the French band on a split EP is the one people know best. Aussitot Mort is a long running screamo band with hints to postrock. The song “La Bourse” is recorded during the same session as the songs on the split with Heaven in her Arms and the one sided split 12″ ‘La Ride Du Lion”. Richmond’s The Catalyst brings us two songs of nineties emo not unlike Fugazi. Old-fashioned, but still interesting because not that many bands are playing it.

First some words about side A. As always these members of Amanda Woodward and Sugartown Cabaret deliver a massive song that slowly builds up towards an energetic melancholic orgasm. With screaming in French, the vibe of the band stays unique. I just want to hear more of Aussitot Mort when this song is over.

On the backside The Catalyst has a hard time to impress me as much. The don’t succeed with their raw rocking nineties emo that has bouncing drums and feedbacking guitars in the musical whirlwind of “Thumbsucker”. After ten plays I still can’t fully go crazy on this song. Next up “Our Science is Right”, could’ve been a left-over from At the Drive-In because it has the same rocking and hectic vibe as the guys from El Paso. But after “La Bourse” by Aussitot Mort it’s really hard to surpass. Yes, it’s decent stuff but it won’t connect for 100% with me either. Maybe you’ll like it? Just listen to the songs on bandcamp below.