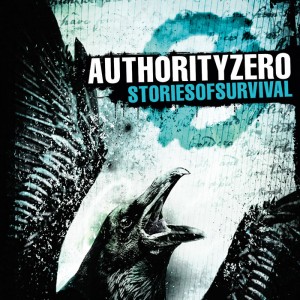 Stories Of Survival was initially released on Fletcher’s (from Pennywise) label in 2010. Apparently Concrete Jungle Records saw enough potential in the record to re-release it two years later, adding the six acoustic songs from Less Rythm More Booze as a bonus.

Authority Zero started in 1994 but it took the band eight years to finally release their first record A Passage In Time. Ever since, the story of Authority Zero has been the story of a band being too late. Their sunny skatepunk with Spanish influences and reggae would have made a big impact back in 94-96 during the glory days of The Offspring, Pennywise etc. But early 2002 the world wasn’t paying too much attention anymore. However through touring with bands like Sum 41 and No Use For A Name the band found the right audience and kept going on. Especially in the USA the band became bigger and bigger. But they never really set foot on European soil.

Stories Of Survival is the fourth studio album from the band and actually was well received in the USA upon it’s release. There is something catchy about this record. The music isn’t worse than anything Pennywise has released the past years and the lyrics deal with the economic crisis and protest. I’m no big fan of reggae but Authority Zero even manage to do some reggae stuff without me hitting the skip button. Like ‘Big Bad World’:

The biggest setback about Stories Of Survival though is that it sounds very outdated. Not because the record is two years old but because the Ryan Greene production (probably one of the bigger producer names in the 90’s skate-punk scene) makes it sounds like a record from ’96. It would be a good idea for the guys in Authority Zero to let go of their 90’s punk worshipping and go and find a producer who can give their sound a  more modern feel.

With drummer Sean Sellers (Good Riddance) as the recent edition and a euro tour happening at the moment it seems like Authority Zero is ready to come and conquer Europe anyhow. If the amount of people wearing an Authority Zero shirt at Groezrock is an indication, they’re making progress as we speak.