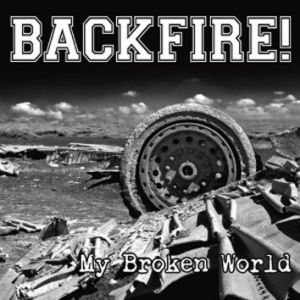 Ever been to one of these parties where you didn’t expect to see an old friend? And this friend has grown a little bit more older, bitter and frustrated but still is great to hang out with? Well, ‘My Broken World’ is that friend.

Backfire! always has been one of these household names when it comes to European hardcore. There is always a chance you don’t like their style but you can’t deny they made some great albums and reached all their goals. However the last few releases always felt they still had something to prove. It made the albums more furious. On the other hand, there never really was a need for that. We already knew that these guys live and breathe hardcore. Now they realise it themselves and they bring their best album ever.

Somehow I have more fun listening to this album than their previous releases. You hear the fun and the freedom they found. While the lyrics seem more bitter and personal than ever this is the result of four guys that know what they do, how they do it and know how to enjoy themselves while doing it. The songs are hard, in your face and out to destroy your preconceived notions that everything will be alright. The production holds a nice balance between a clear sound and rawness. It maintains the power they bring at their liveshows.

The biggest surprise is Pat’s voice. It has grown deeper, rawer and more controlled. It shows his skill and although he has a limited range he knows how to use it without sounding forced. Especially in the first few songs the growls at the end of a sentence show that he is a natural at what he does. The rest of the band does also what they should be doing. Somehow they sound more like a band straight from New York than ever before. The songs remind me of Madball and Killing Time without losing that typical Backfire! sound. The only problem is that I haven’t heard a Still dedicated like anthem. Who cares anyway when all the songs sound solid and harder than ever.

To be honest, none of the old critics will become a fan if they weren’t before. The band is clear about their intentions. ‘This is not a comeback, this is an encore’. You can’t make it any more clearer. Still I feel like this is volume two and if you ever wanted to get into this band this is the ideal time to do it. I guess there always people who don’t like a certain band. But if you are into hardcore and want your hardcore aggressive, hard and direct this is your band.

PS: I love the guest vocals of Dave Reumers and Hein Tech 9. I like their Crowbar cover even more  it fits nicely on this album.