Backfire! – Where we belong 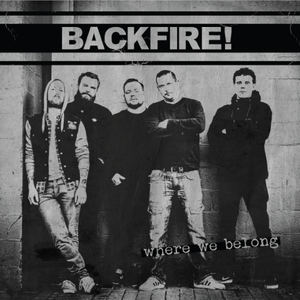 When it comes to Backfire! you never know what they are going to do anymore. Their last full length ‘My broken world’ stood firm as a declaration of independence from their long running and controversial past. Still musically it was hardly a departure from their past despite the harder and darker tone.

On this mini album they venture further into unknown musical territories without alienating the past. The addition of Sjarm 13 (ex-Reaching Forward, ex-Modern Life Is War and ex-No Turning Back) and Giel (ex-No Turning Back) is not only felt in the details. They bring along their influences but don’t worry. Backfire did not become No Turning Backfire!. If I have to mention a new influence it would be Kickback. The songs are again darker, less catchy and on some parts they make the usual sing a longs we all know and love nearly impossible. This is actually a more welcome change from before because the songs now actually tell a more interesting and complex story than before.

Luckily the song ‘Where we belong’ is a new evergreen that is on par with a song like ‘Still dedicated’. The only addition that I miss to this minialbum is a very weird cover of an obscure popsong. Why? Because this is spiritually Backfire’s ‘Something old, something new, something borrowed and something new’. Which means their next album might be a classic like Love Songs for the unloved…