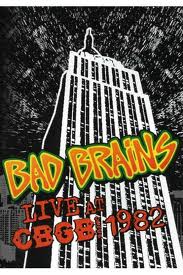 What can I say about this DVD? It has Bad Brains footage on it. One of the most important bands in hardcore ever. That should be enough for you all to stop reading and run to the nearest store and pick up this release right away.

60 minutes of Bad Brains mayhem, compiled from over 4 hours of footage. It looks fantastic, it sounds great. Especially if you consider this footage is from 1982. The whole DVD is one big highlight. From the song selection, both the heavier songs and the reggae songs, to moments like during “Riot Squad” where the CBGB’s lights blew a fuse and the band keeps on playing in the dark etc etc.

Of course I would like to have seen even more from that 4 hours of footage, more bonus material (2 minutes of “fan” interviews and a audio track aren’t really interesting). But that’s like wanting more after you just received a million bucks.

Man, if it was possible to give even 6 stars I would. This is a so called classic for sure. Just pick it up and be amazed. You need this.

Just check this video preview, if you really need to be convinced: