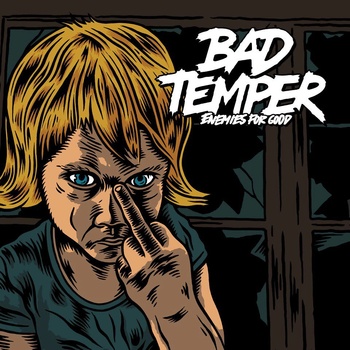 So here’s that debut of Bad Temper, from Rotterdam in the Netherlands, playing fast punkrock the old way. They call it streetpunk, but it’s melodic and catchy enough for one of those old Burning Heart samplers. Anyway, here’s the debut titled Enemies For Good. It’s quite nice I think.

Gaining experience in bands like Second Chance, Rock Oil Roadhogs and Harbour 8, these guys (and girl) know their way around a nice punk song. This has gotten them some appreciation in the shape of plenty gigs and support slots with bands like GBH, Street Dogs, Ignite, Iron Cross, Backfire and Tech 9. All that aside, I hear a combination of Ten Foot Pole and 7 Seconds. Maybe a whiff of Satanic Surfers even.

Anyways, there are 14 tracks ful of dynamite on this record and truth be told, the female fronted Bad Temper clearly deals well with the fact that vocalist Ashley mellows down the sound a lot. All their power is thrown into being fast, energetic and generally tons of fun. A song like ‘My Philosophy’ demonstrates that clearly in a more sharply voiced way. By adding both guitarists on vocals, the song gets more depth.

Mind, mellow doesn’t mean it doesn’t rock. Songs blurt past so fast that you have to pay attention. ‘Gotta Let Me Go’ has even got a little bit of that Get Up Kids vibe, where ‘Regrets’ bursts past in the speed old Pennywise would do it. The album is one cohesive blast, which you can also consider its weakness. I think it’s kinda cool and feels a bit like those ’90’s punk bands I used to love (still do, have to be honest).