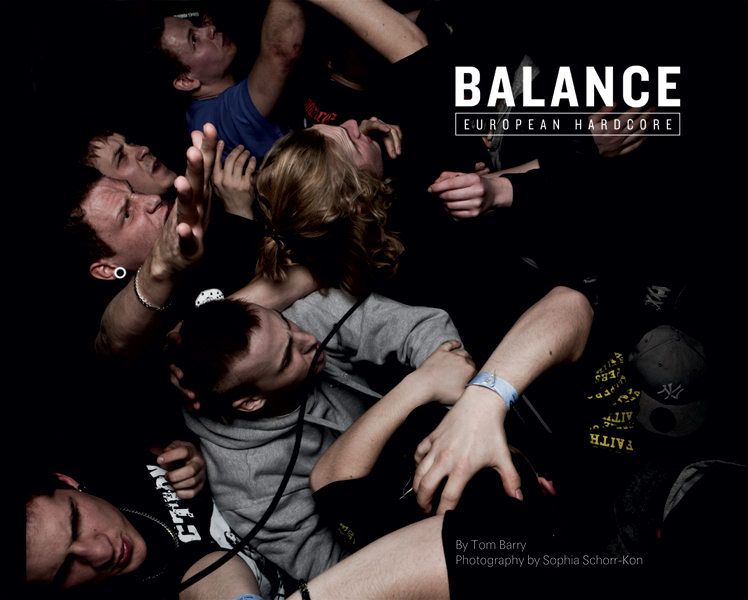 I don’t really know what to do with this book. If I would be brutally honest I could say I’ll put this next to my other books and never look in it again. I could mention the fact it’s not really in-depth, that I don’t care much about the style the bands mentioned in this are playing, call it expensive, give it a low rating and be done with it. But that wouldn’t be fair.

For one thing, it looks great. Classy even. Photographer Sophia Schorr-Kon did a nice job on documenting it all and Siâron Hughes put it together wonderfully. With the risk of sounding like an art teacher: Lots of white and lots of breathing space for the text. And while I still prefer my hardcore photos to be black and white and photocopied, these dark but colorful ones come across as a breath of fresh air in a way. At any rate, the whole design is a big contrast with what you usually see in the visual department of most hardcore bands. Good job. And because it’s a 160 pages hardcover book and the whole things oozes quality it’s going to have a price. Around 30 euro / 17 pound / 26 dollar is actually pretty fair. Books like that simply are costly.

It’s well-written and there’s some interesting stories in there. Adam from Poland for instance, who’s a miner, being cut off from the rest of the world the entire day until he’s done. I also like that they portrayed the people who were interviewed for this book both in their working and in their ‘hardcore’ environment. To show the contrast (for some it’s bigger than others) between the two. That’s also where the title of the book comes from, the balancing act between their working life and their ‘hardcore life’. Great title. Which brings us to the subtitle and that’s one of the problems I had with this book. It’s “European hardcore”, but it should actually say “A couple of persons from the heavier side of hardcore in 5 countries”. But I have to admit, not quite as snappy as “European hardcore”. It’s a shame not more countries were visited or more ‘styles’ within hardcore got covered. On the other hand, all you “E-chugging Dogheads” out there will probably love this book. And I can understand. But it could have been better.