Ball Of Destruction – issue one ZINE 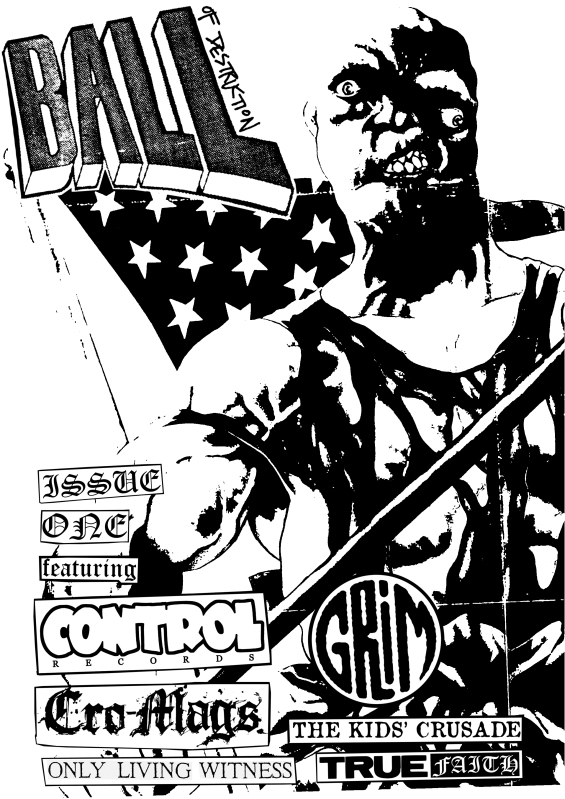 I used to collect zines, almost religiously. If someone was selling their “made-in-Word” piece of art, I picked it up, if someone was selling a box of old zines I picked it up. It didn’t matter how it looked, or what was in there, as long as it was in a language I could understand (and even then… I picked up some stuff I even couldn’t even read…) I wanted it. And then you realize lots of those bands (and / or the interviews) don’t have much to say or repeat themselves… So I kinda stopped doing that. I forgot about lots of those zines (still have all of them though), but the zines made by Angelo, Persistent Vision & Tales Of Shatou I didn’t forget. So when I saw an advert in our forums about a new zine featuring Only Living Witness, Cro Mags, Control Records & The Kid’s Crusade I was interested, when I realized it was done by Angelo I buyed one right away.

Since Angelo has been at this game for ages, it’s no use to give him advice (like “The font used in the Grim interview is a tad too small”), dude knows what he’s doing and I dig it. So let’s just talk about what’s here:

First thing you see when you open the zine is a live photo of Supertouch feat. Walter Schreiffels, there are worse ways to start your zine with right? First interview is with Kristof of Grim (check out his other band Get Wise as well) and he namedrops Nirvana & Only Living Witness. Scoring points there! He also mentions Burzum… Points gone again. Up next is a nice article on Don Fury produced bands: “either the bands feature members of classic NYHC bands or they want to sound like Quicksand”. There’s a nice interview with Geert of Control Records. A nice review section, he more or less wrote down exactly how I felt about the Jimmy Eat World / Rival Schools show I saw in Amsterdam or current Cro-Mags shows. I share Angelo’s love for the Kid’s Crusade demo, hope I can catch em live soon. There’s a short interview with them in the zine. Talking about writers that never did a Batman comic, so I can’t relate to it. One of Jonah’s answers in the Only Living Witness interview made me laugh “But, of course, we’re going to be very careful not to end up like a lot of the Profile bands did. They came out with amazing products, but they got fucked because of contractual bullshit”. Obviously answered before the Century Media drama that ended the band. Angelo must have liked that part too, because he printed it twice. The zine ends with a ‘funny-because-he-really-says-those-things’ page called “Glenn says the darndest things”. There’s more between the mentioned stuff, but you’ll get the idea.

All in all a great zine. I wish more kids did (good) zines again.

Pick up your copy