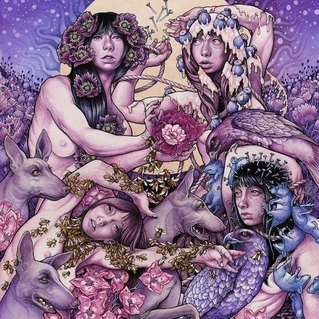 After an underwhelming album (that should never have been a double one) and a tragic accident, John Dyer Bailey has finally returned with a new Baroness album, Purple.

For everyone who wonders if the band can still write crushing riffs, just check out the first seconds of opening track ‘Morningstar’. There a virtually no moments on Purple when the term sludge would be appropriate. But boy o boy do these men know how to rock. Luckily, the new songs are no logical follow up to Yellow and Green; Baroness has embraced their rock with wide open arms and added some strong riffs here and there to pack a harder punch. Baizley and remaining original member Peter Adams still have some remains of ‘Tower Falls’ left in them.

But this is easily forgiven because the new approach (not simply combining what worked on Red and Blue to create Purple) works really well. A song like ‘Try to Disappear’ is balls to the wall rock, with a anthemic chorus so strong that its hard to sit still. Hooks and melodies are the strong point of Purple, connected by a strong new rhythm section and heart wrenching lyrics but sadly, not enforced by great production.

If you don’t still mourn the passing of sludge band Baroness, this could be a great record for you. With actual eight songs in roughly forty minutes, it is concise and hard hitting.