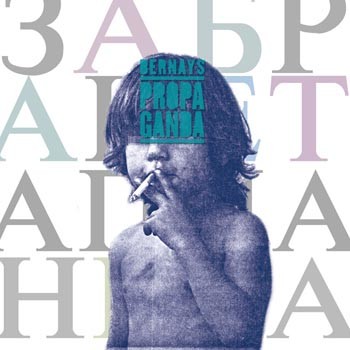 From a country many Europeans for various bad reasons will not even know, comes Bernays Propaganda. Well, they are doing a pretty intensively long European tour right now, but they originate from Skopje, Macedonia. Boasting an unique sound, the band is now promoting their new album Zabraneta Planeta.

The band is inspired by postpunk of the more danceable kind. Now dancing has different types, but think of Gang Of Four but also Big Black and Public Image Ltd. The band doesn’t seem to spin off course as much as the last, doesn’t turn too martial or too funky (Pere Ubu style), but takes the middle road.

The vocals of Kristina Gorovska sound cute and innocent (and sometimes a bit like Yolante Visser from Die Antwoord). The dancable rhytm’s on ‘Pogresno Zname’ and ‘Makedonski Son’ are pulsating, driven and aggressive. The minimalism of ‘A Bone To The Dog’ feels a bit more new wave. The bassline gives a dark feeling to the song however, that intensifies into a repetitive line: “I’m tired…I’m tired…I’m tired…”. Loudly whispered into your ear. ‘Bar Kultura’ doesn’t stray from that sound, but has a bit more fun in it.

Though often minimal sounding, there’s a clear energy and enthousiasm in the music of this group. ‘Cuvaj se od tie sto te cuvaat’ has that too, though winding down at times to a gentle sound. The titlesong has a more punchy bass sound, which pushes the song forwards into a loud guitar track, that sound a bit nervous outside of the chorus. An interesting line can be heared in ‘Ordinary Toy’: “Small countries can’t dream…Uncle Sam’s dreaming for us… “. It kinda sums up the protest sound that is hidden in the music of this band.

‘Dodeka krstot ne go zgasne’ is another of those dancable, neurotic tracks and ‘Leb I Igri’ is a tense, dark song, with heavy bass riffs and those vocals that make the hair in your neck stand up. Bernays Propaganda makes a very interesting and unique brand of music. Not without reason they are received well where they play. Maybe near you soon?