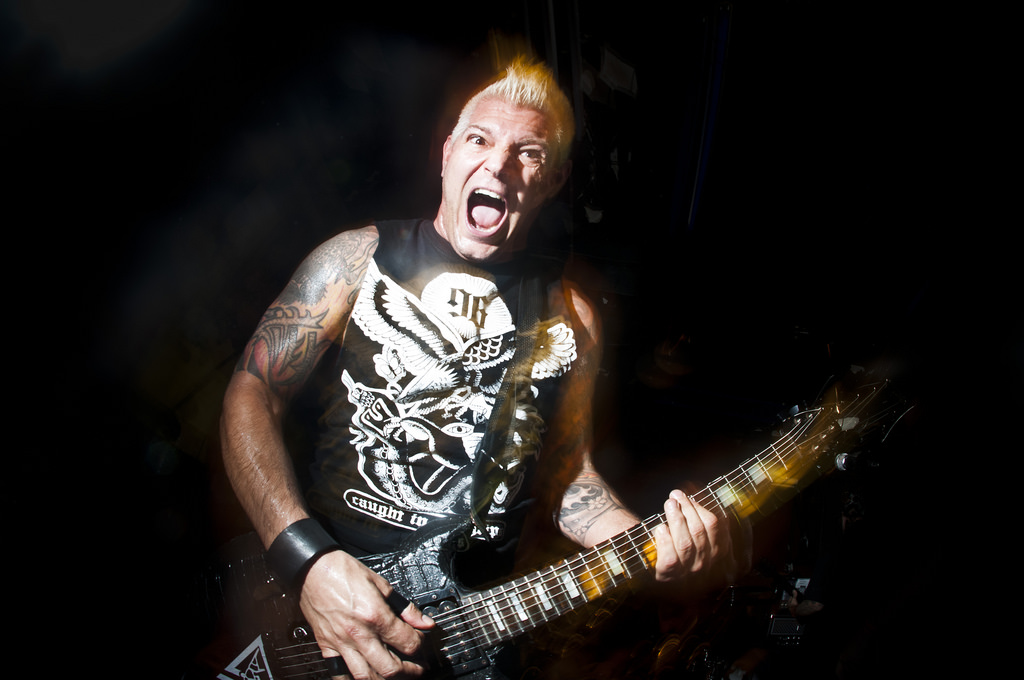 It may be a cliché, but one of the things I love most about hardcore ever since I got involved in this stuff 20 years ago, is the whole DIY thing. The fact that if you have an idea in your head, with a little balls and maybe some help from others into the same things, you can just go ahead and do that shit. Want to be in a band? Get an instrument and start a band. Want to do a zine? Ask your favorite bands, big or small, to do an interview and go to print. No shows in your area? Get a cool venue involved, book bands, spread some flyers and let the good times roll.

A few years ago, Edmond of ZLHC Party, did just that. After the decline of Uppercut and their legendary farewell show in Middelburg (let’s just say the crowd quite literally brought the house down that night), the once thriving Zeeland Hardcore scene in the South West of The Netherlands kind of dried up. A quiet period followed, until Edmond simply picked up the gauntlet and started doing shows. With a mixture of passion, determination, recklessness and just the right amount of insanity, he has accomplished some amazing things over the past five years. I never thought I’d see him do anything crazier than having Knuckeldust and Firstblood play a venue smaller than my living room. I was mistaken.

If a relatively small show booker like myself gets offered a band like Biohazard, he laughs, says thank you and carries on with his daily business. Stuff like that just isn’t possible unless you book for a big ass venue, sitting on a shitload of money, right? Wrong. Edmond jumped at the opportunity and with help of a little crowd funding campaign on Facebook, the required amount was secured and the deal was sealed within 24 hours. 100 tickets were made available. Needless to say, they sold out in under 8 hours.

So on Friday the 8th of August, in the year of our Lord 2014, Biohazard played Bar American in Middelburg, a venue that holds a maximum of roughly 150 people and has a stage based on two pooltables and a couple of bar stools. A few minor issues had to be conquered (where do you a park a Nightliner tour bus when your show takes place in a small bar in the center of town?) and the whole thing nearly fell through because of conflicting traveling schedules, but with help of the booking agent, tourmanager and even the bandmembers themselves, everything was straightened out. The band apparently fully understood what this was all about and showed an amazing down to earth attitude, playing over equipment borrowed from the opening bands and hanging out with fans all night.

Local heroes Tarantino and Run Like Hell got to open with good sets. Undivided from New York City, touring with Biohazard, had the hard task of being the band nobody really wanted to see, but they played a tight, be it somewhat monotone set of groovy mid-tempo thrashmetal/crossover, ending with a fine rendition of Carnivore’s Sex & Violence. But that was not why everybody was there. Biohazard took their time changing over and you could feel the giddy anticipation rising in the already steaming hot air. Grown men and women poking each other, wiggling from left to right on their feet and grinning like a little kid about to open his new Xbox One on Christmas morning. Was this really going to happen? When Billy, Bobby, Danny and new bassplayer / vocalist Scott climbed the small stage and the intro tape started, everybody knew for sure. This was happening alright and it was going to be amazing.

The setlist was every Biohazard fan’s wet dream (no songs after 1994), the bandmembers gave it their all for well over an hour, as if they were playing a giant arena or festival, and were literally soaking wet with sweat after about 5 minutes. The crowd (average age well above 30) went nuts in an old school push-and-shove moshpit, stage divers and crowdsurfers were flying, fists were pumped in the air, lyrics were screamed at the top of lungs, water dripped from the ceiling and there were smiling faces all around.

To say this was a memorable party for all involved is the understatement of the year. Billy, clearly enjoying himself a great deal, summed it all up with a huge compliment: “We had a place like this once in New York. It was called CBGB’s.” 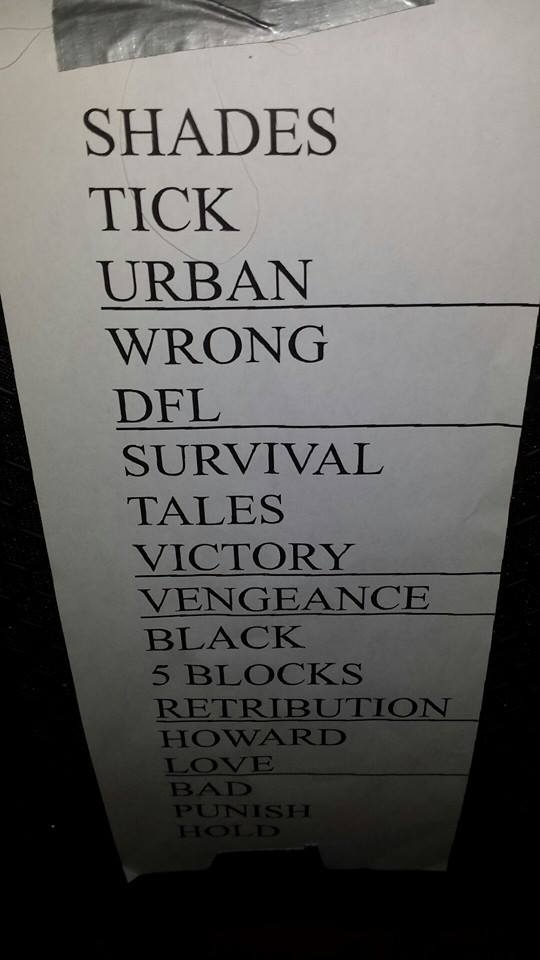 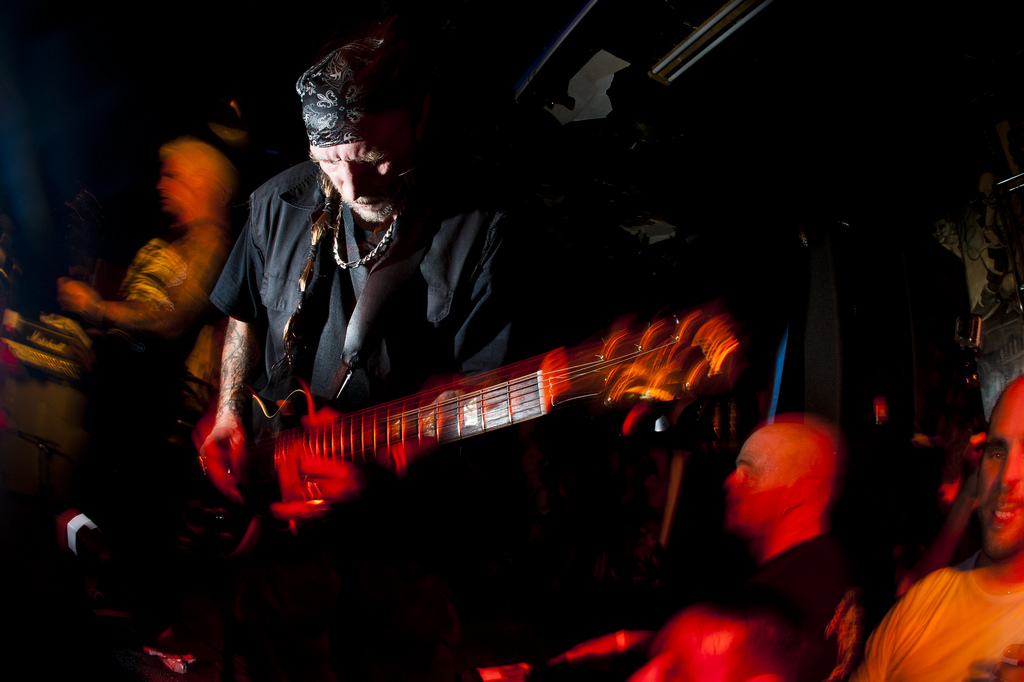 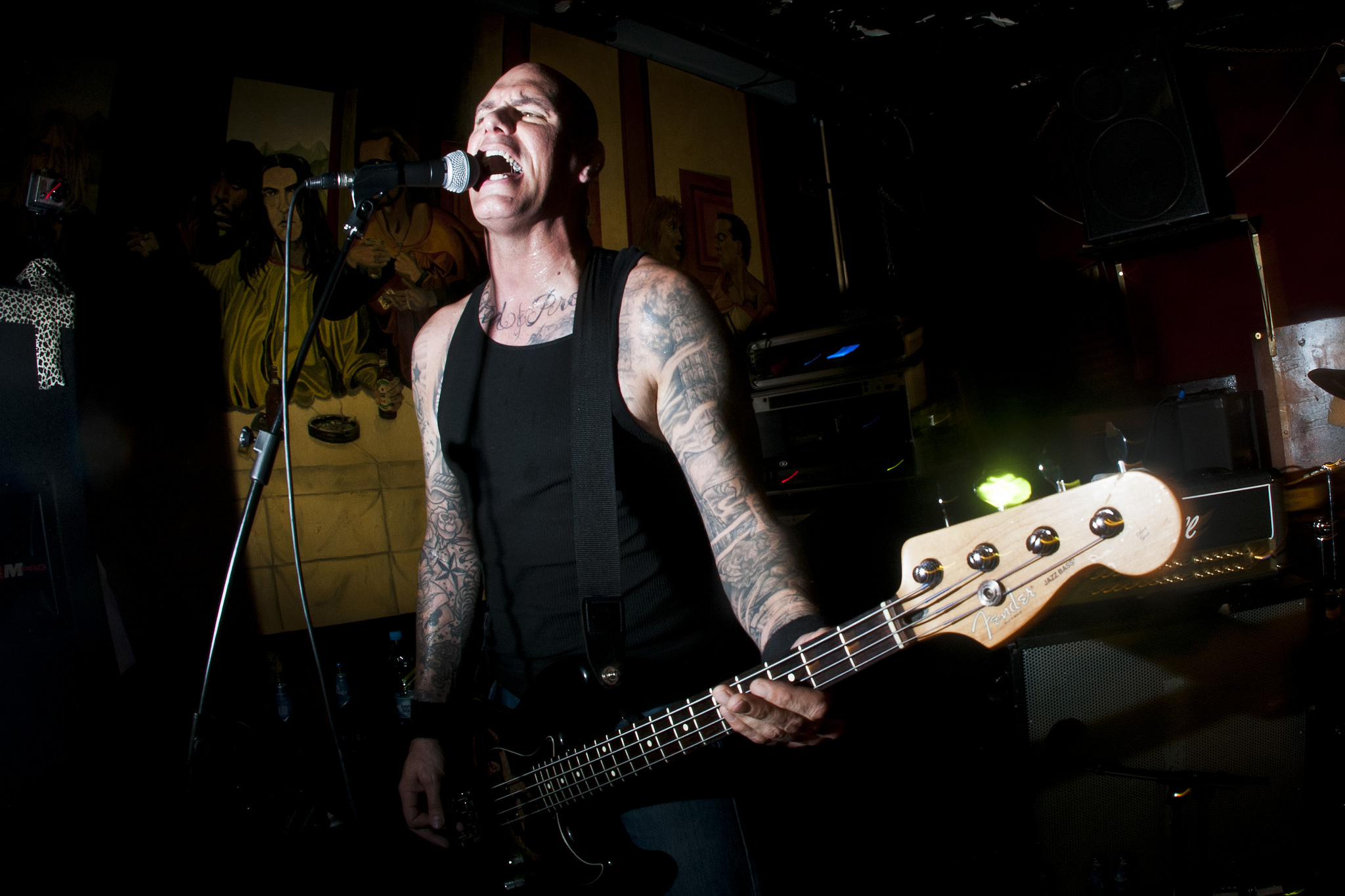 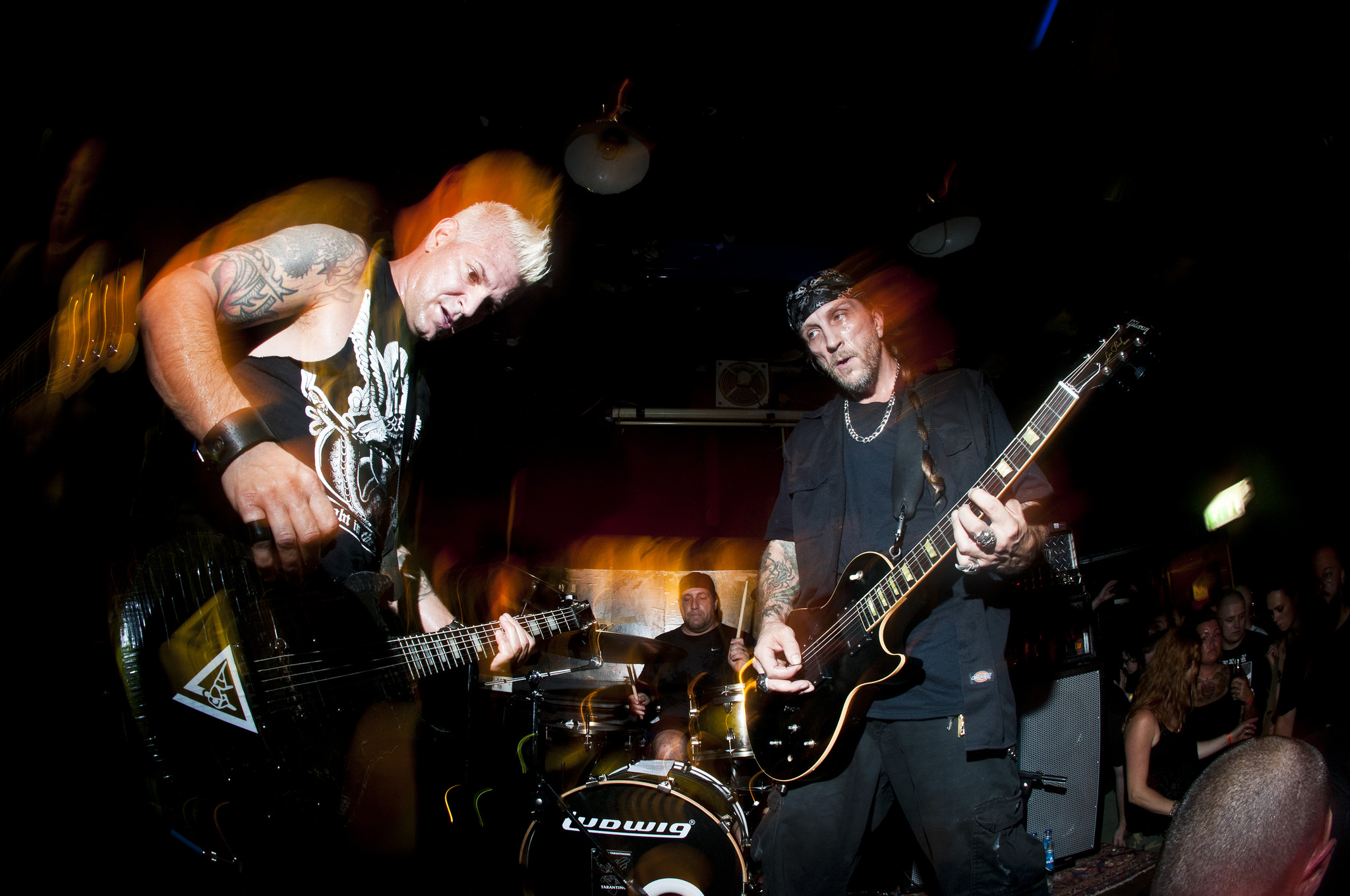 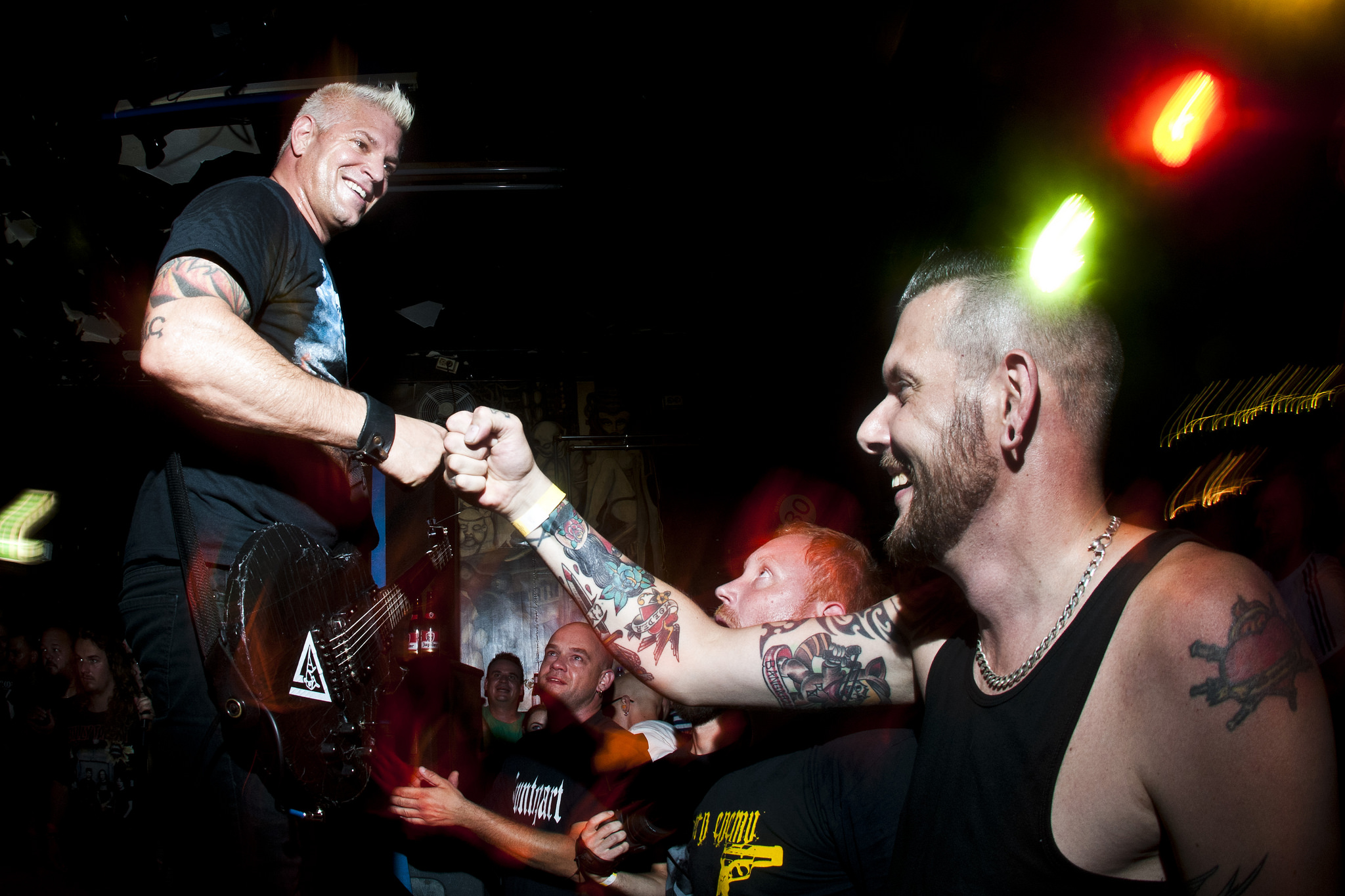 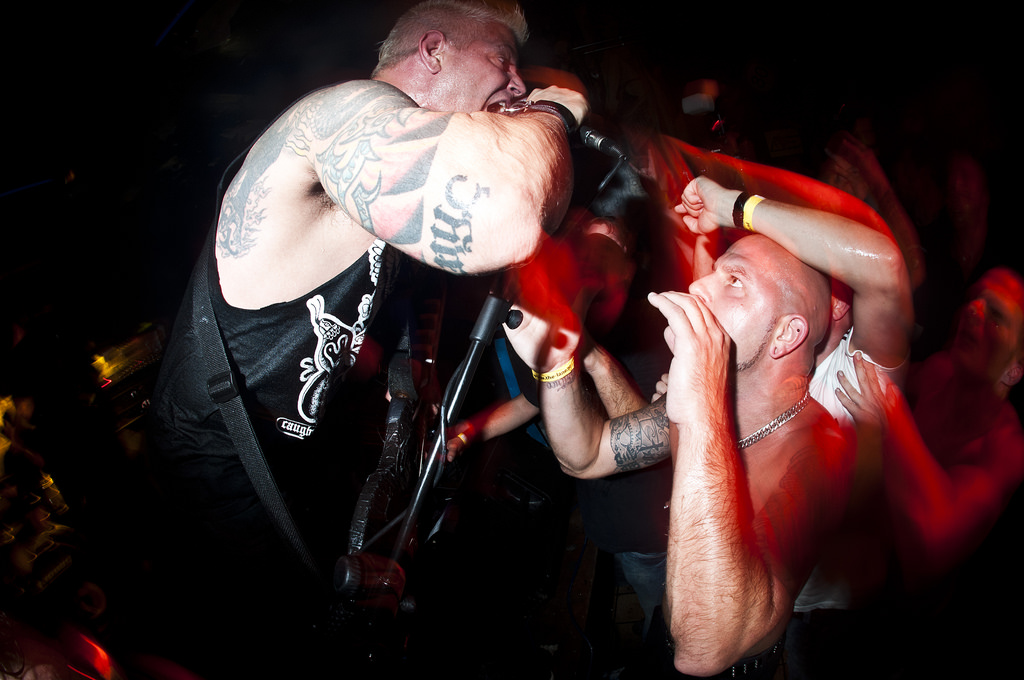 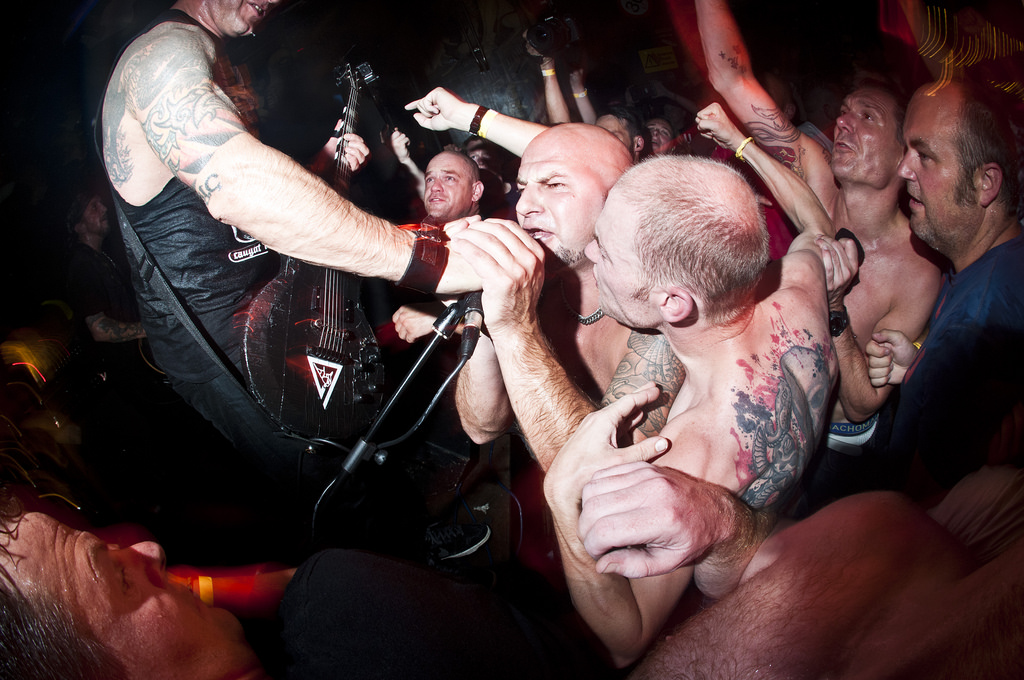 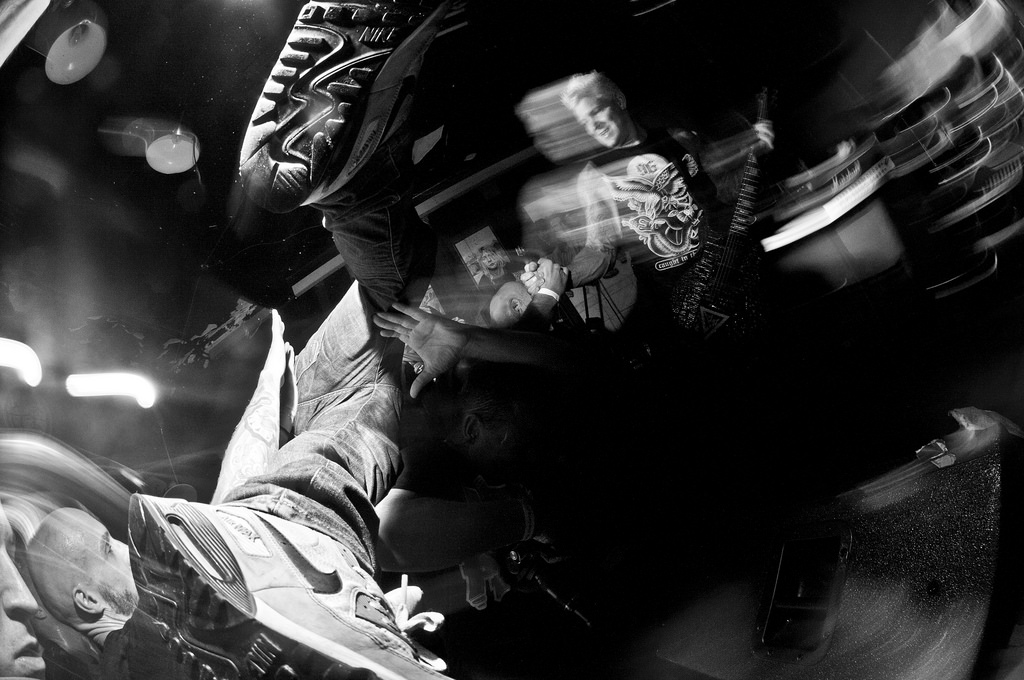 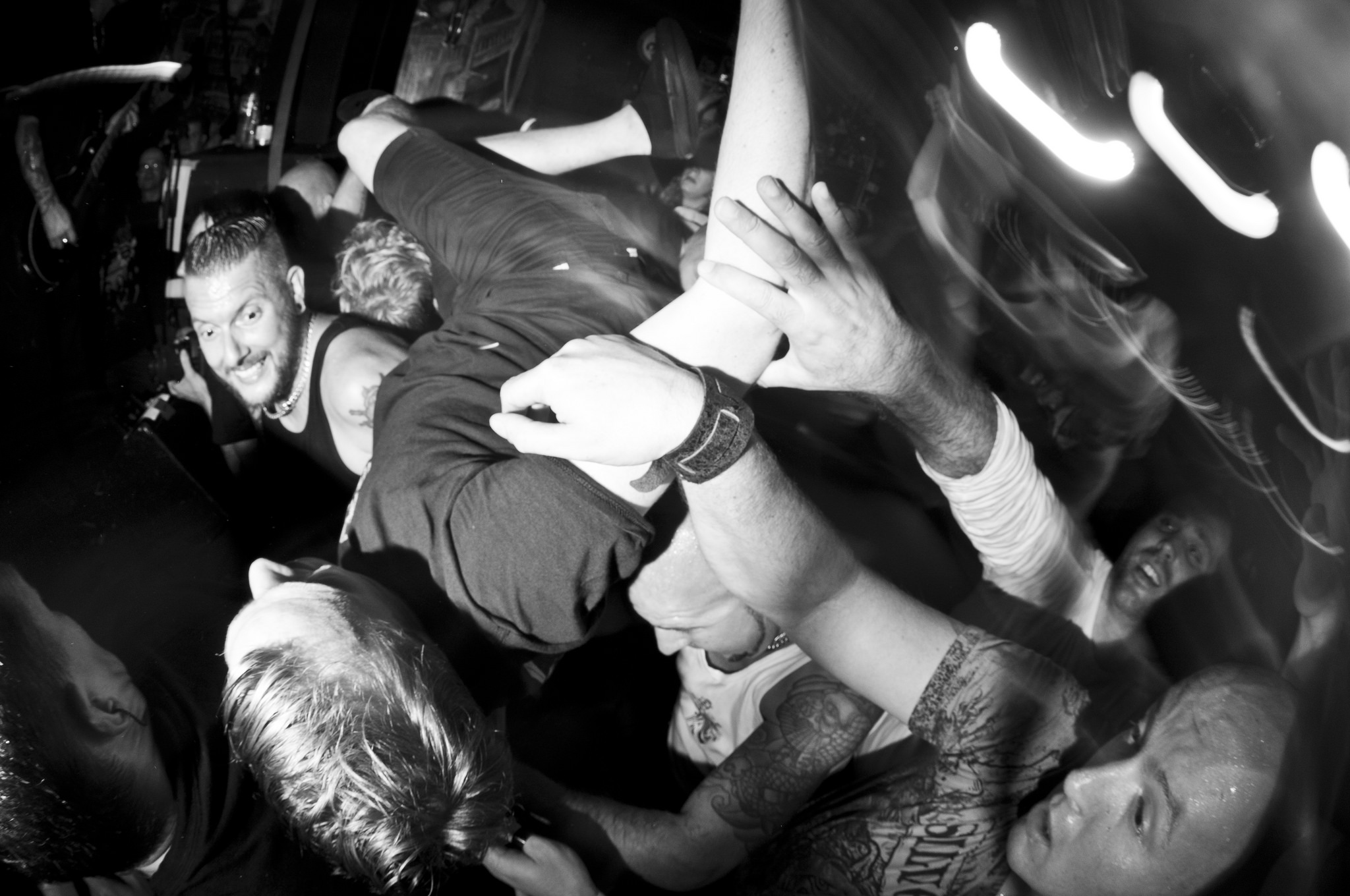 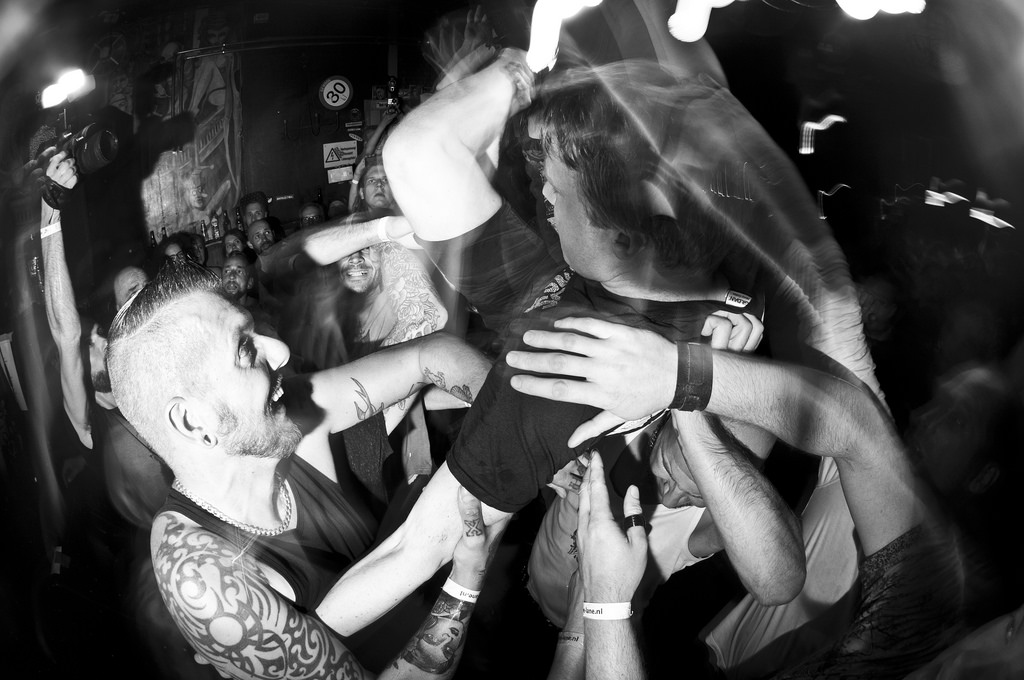 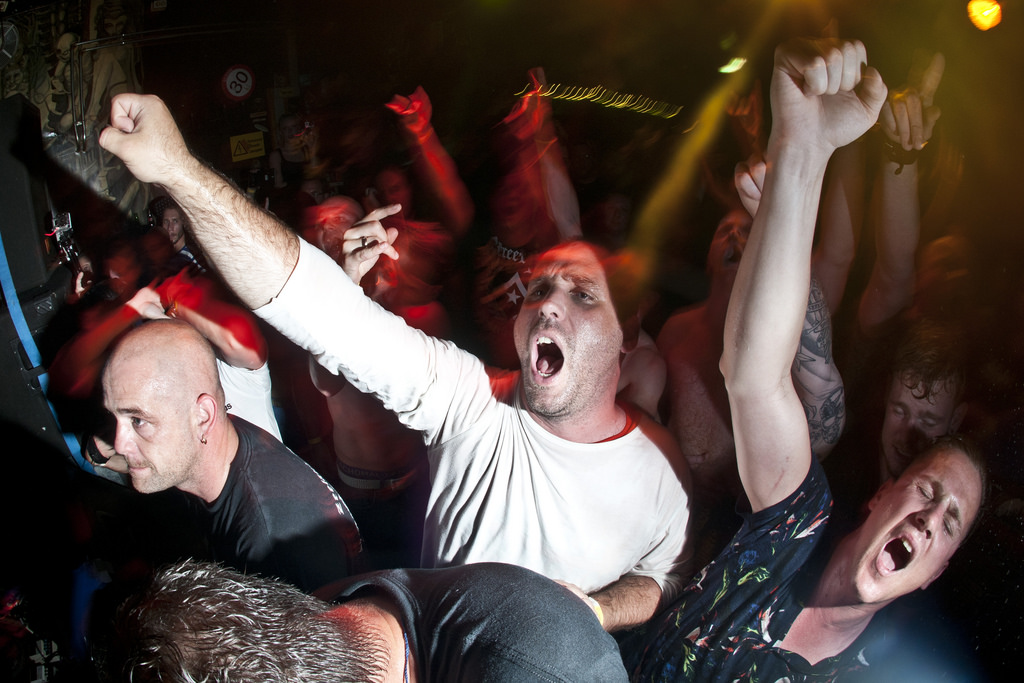 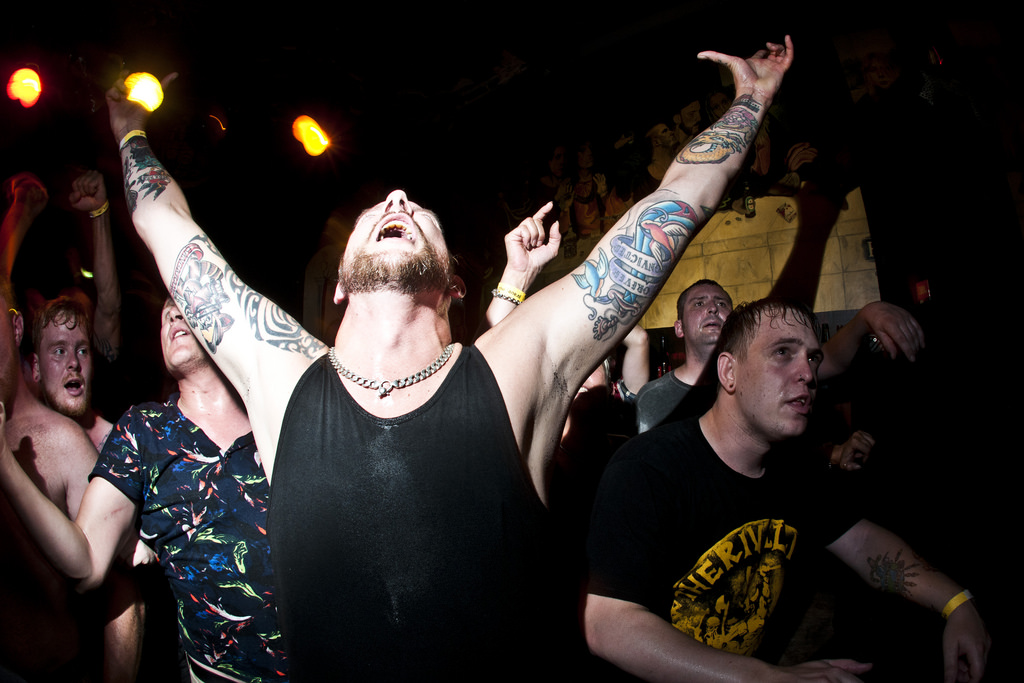 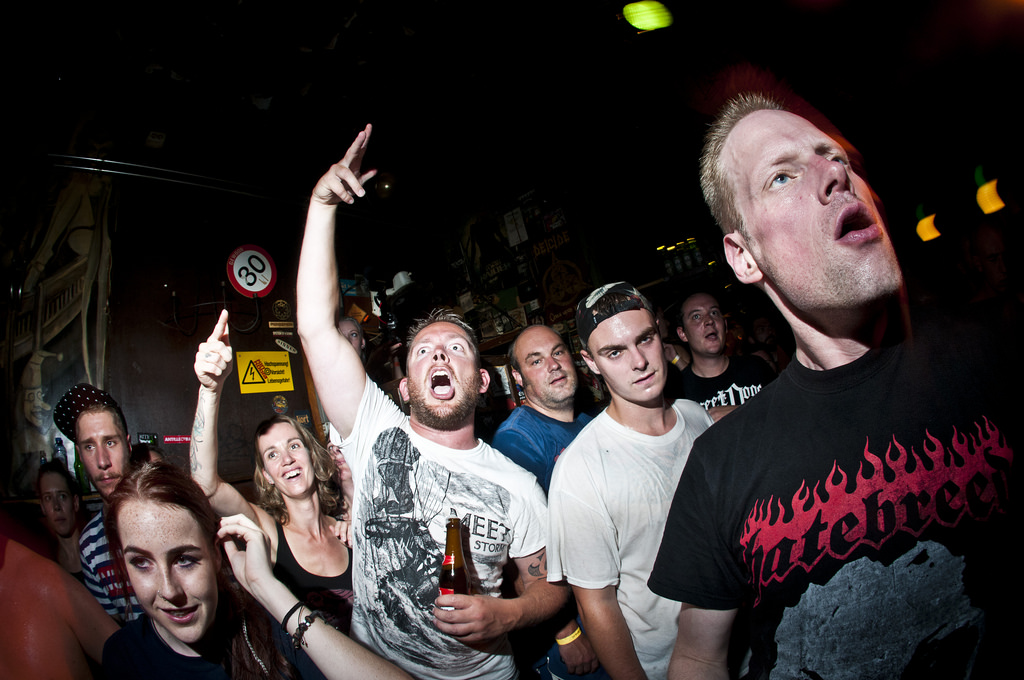 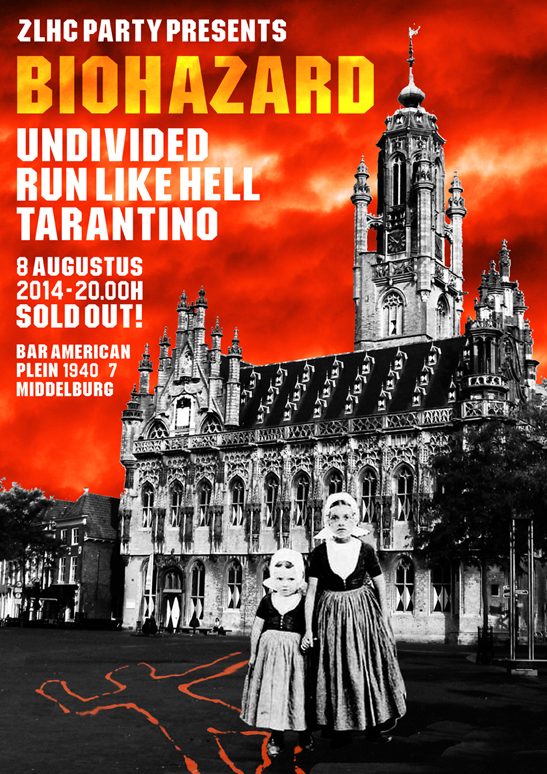