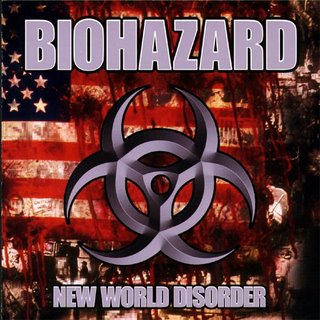 In all honesty, how much can you actually say about an album that is re-released on vinyl in a status that most closely resembles how it came out some 13 years ago? Not too much I’m afraid. Biohazard is still alive and kicking in 2012 after disbanding for a time. This sixth studio album does signify a particular phase the band was in at the time in 1999, which is probably more interesting than the record itself is.

The band from New York has always been on the progressive side, fusing hardcore and hiphop together with some heavy metal alloy. Mercury records released the album, which would also be the last on this label. The gang from Brooklyn felt misunderstood and it appears the feeling was mutual. After leaving Mercury, Biohazard released the successful ‘Uncivilization’ on SVP. What followed in their subsequent career was a period of fame, the demise and finally a rebirth as one of the greats in the genre.

Like with all bands that grow through the years, the opinions about ‘New World Order’ have always been mixed to say the least, what we can surely say here is that the record is pivotal in the history of the band. It marked down the band as becoming huge, but it was before Evan Seinfeld started displaying other talents as Spyder Jonez. So how relevant is this album today? Well, it’s the type of album one can call timeless. Songs like ‘Resist’ are still hardhitting classics that everyone can identify with. ‘Switchback’ demonstrates the clear influences of hiphop, ever present in hardcore from here onwards. The barked vocals of Evan Seinfeld and Billy Graziadei add up to its gritty quality.

Listening to all of this record, there is no real difference one can hear, no remixing or polishing up the sound. It’s the same record in a sleeve that looks exactly like it used to (only now the letters are in silver). The sixth album with contributions from Sticky Fingaz, Christian Olde Wolbers from Fear Factory and Igor Cavalera from Sepultura is a classic that is now out on vinyl, simply because one could never get it on the phonograph record. So, this makes it a special release, celebrating this album which definitely deserves such honours. Whether you like them or not, the album that deals with the gritty streetlife and state of the world at the turn of the millennium is a monument of its time with tracks like ‘Camouflage’ and ‘Cycle Of Abuse’.

‘New World Disorder’ was released during the high tide of CD’s and sounds totally different from recently released ‘Reborn In Defiance’. If you like it, do pick it up. If you hope for extra’s… I’m sorry, there’s none.