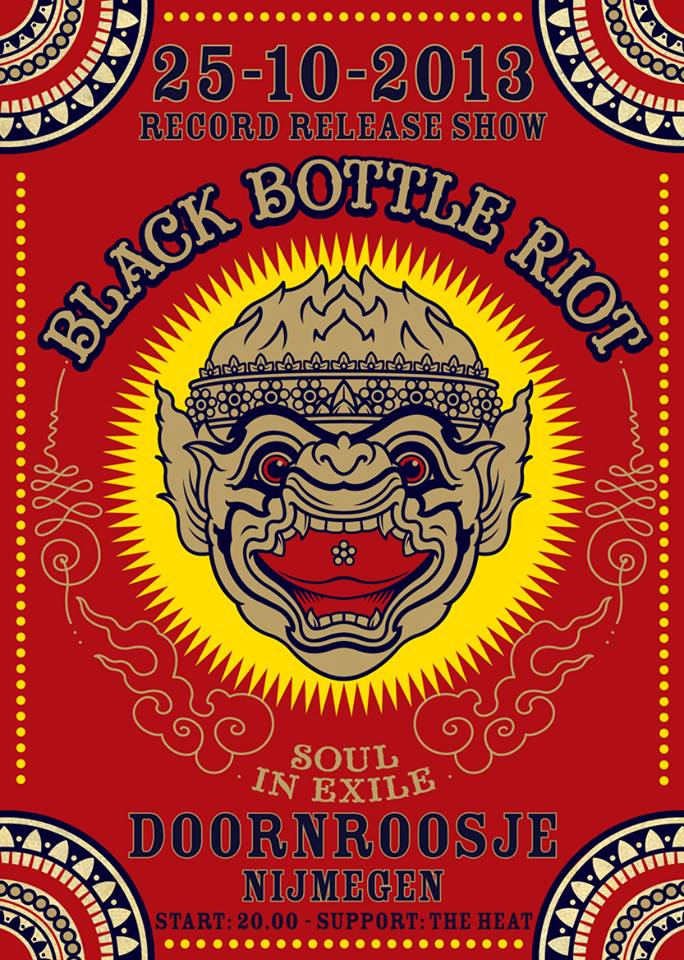 My first hardcore show ever, and the show that got me hooked, was No Turning Back at the Batcave in the 013, Tilburg. The opening band was Fight 121 (I-Reject also played). I don’t remember much of them to be honest, but I know that one of the guys in that band was Jaap. Later on he moved on to Black Cloud Halo. Rocking hardcore. Good band, long sets though. One of the other bands I saw at one of those early shows (for me) was Reaching Forward, at De Box in Boxmeer. I’m not quite sure if Pieter was still drumming for them, or if he already moved on to Born From Pain…  Either way, what I’m trying to say: some of these guys have been in hardcore bands for years. And now they’re rocking out in Black Bottle Riot. Oh and let’s not forget the DJ they asked to spin some vinyl between bands, DJ Don Gio, who used to play guitar in No Turning Back.

Black Bottle Riot has absolutely nothing to do with hardcore though. But now you know where they’re coming from and why we’re talking about them on this site. These guys play some sort of bluesy, southern rock (and I’m not talking Brabant here) and tonight they were presenting their new album “Soul In Exile” at the Doornroosje in Nijmegen. Put out by Suburban Records.

Of course we managed to miss out on the opening act, The Heat, but I’ve heard they played a good set. What we did see upon arrival was the “Sold Out” sign. Damn, they did it again. Selling out a great venue like Doornroosje (it really sucks places like this all seem to go away in the Netherlands), not bad right? 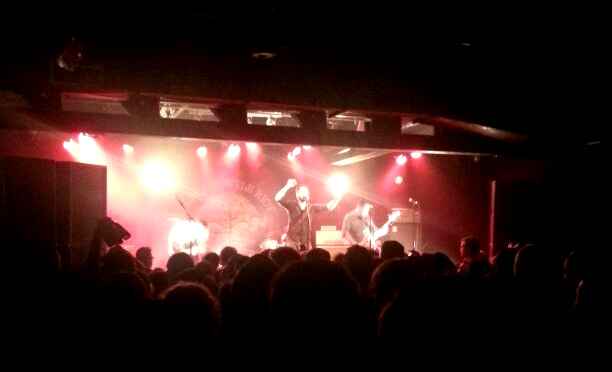 First thing they put in our hands when we entered the venue was a ticket for their very own “Black Bottle Riot” beer. They wanted everyone to be able to get a taste, so that’s why they came up with a ticket system, 1 for each person. I have no idea if they simply switched labels with a regular beer or not, but it did taste good. Maybe available somewhere near you soon? The “Hertog Jan” bottles afterwards did too though and other people apparently agreed, because halfway through the evening they sold all of them. Yes, that kinda night.

But how about the band I hear you thinking? Well, they played a nice mix of old and new material. I prefer the older material (like “In The Balance”) myself, but that could be because I’m less familiar with the new stuff. The newer songs are probably better, they’re less heavy though (I’ve had some more time to listen to the record by now and they sound great on record, Sven Lens gave em a real honest sound, meant to be played loud.). The background singers were a nice touch, and they even had the balls to do a short intermezzo with Simon doing a solo cover of “Sitting On Top Of The World” (Yes, had to look that up). Daring, but the audience seemed to love it. All in all I wasn’t blown away tonight though, maybe because I wasn’t really feeling the sound. Little stuff like those background singers could have been turned up a bit, but more importantly the overall sound felt a bit flat to me. I mean, if you can normally talk with one and another something’s really wrong hehe. But I wasn’t upfront, so maybe it was better there. It did seem to get better nearer the end of the set. Either way, they did actually play a solid set and everyone seemed to have a good time. In the end that’s what counts.

Sold out the place, sold out the beer, played a solid set and (unlike most hardcore bands) actually had the records they were releasing right there… What more could you want? I’m pretty sure they had a great after party at the Underground. Maybe a hangover the day after, but that wouldn’t be from the release show being a disaster.

Terrible photo made by Joost van de Graaf. Can you imagine he actually was sober while he took it?